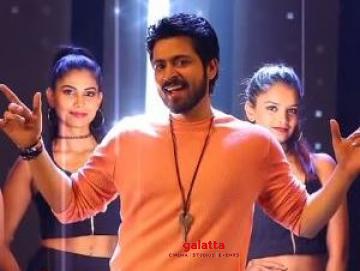 Harish Kalyan is slowly becoming a big name in Kollywood following his sting in the second season of the television reality show Bigg Boss. The actor proved his metal with back to back hits with Pyaar Prema Kaadhal and Ispade Rajavum Idhaya Raniyum. Harish Kalyan has some exciting projects in his pocket and one the biggie is the film titled Dhanusu Raasi Neyargale.

Dhanusu Raasi Neyargale is written and directed by Sanjay Bharathi and the film is produced by Gokulam Gopalan under his production banner Sree Gokulam Movies. Along with Harish Kalyan, this film also stars Digangana Suryavanshi and Reba Monica John in the lead roles as well. Ghibran composes the music and background score for this movie. The movie is expected to hit the screen soon and the team has begun the promotions by releasing the first single from the film.

Under the composition of Ghibran, the song named I Want A Girl has the power-packed vocals of rockstar Anirudh with the lyrics penned by Ku Karthik. I Want A Girl is a highly engaging fun number that would make one listen again. Check out the lyric video below,