Danny teaser - Varalaxmi in full mass mode as a cop! 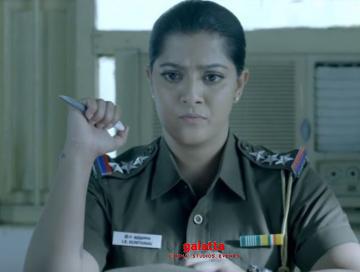 Popular actress Varalaxmi Sarathkumar went on to have a stellar 2018 with major starring roles in ‘Thalapathy’ Vijay’s blockbuster, Sarkar and Dhanush’s Maari 2. Last seen earlier in Neeya 2 earlier this year, she had also announced her next role would be playing the role of a police officer in an upcoming film titled, Danny, under L. C. Santhanamoorthy’s direction.

Being produced by PG Muthiah and Deepa under the PG Media Works banner, Danny’s plot will revolve around a series of crimes taking place across Chennai city with Varalaxmi as the cop following the trail to nab the culprit(s). That said, the Danny teaser has now been released and has plenty of intense and action-packed moments with the story also including a police sniffer watchdog on whom the film is said to have been titled.

Initially announced to come out as this year's summer release, Danny is now being planned for a theatrical release soon and includes music by Santhosh Dayanidhi with Vela Ramamoorthy, Anitha Sampath, Kawin, Vinoth Kishan, Durai Sudhakar, Bala, Ramar among others also cast in supporting roles. Varalaxami, who has been given the title of ‘Makkal Selvi’ in Danny, also has cinematography by B Aanand Kumar with editing by S N Fazil, art direction by Dinesh Mohan MFA, stunts by Billa Jagan and costume design by Selvam.

Watch Varalaxmi in action in the Danny teaser below: