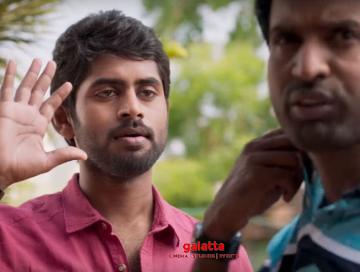 Actor Kathir made heads turn after his thunderous performance last year in director Mari Selvaraj’s breakthrough directorial debut, Pariyerum Perumal, produced under director Pa. Ranjith’s Neelam Productions banner. Apart from Pariyerum Perumal, he has also given notable performances in films like Madha Yaanai Koottam, Kirumi and in a vital supporting role in the blockbuster Vijay Sethupathi and Madhavan starrer, Vikram Vedha. Kathir was recently seen in the newly-released ‘Thalapathy’ Vijay biggie, Bigil, as the superstar’s friend, and also appears as a footballer player in the action sports drama. With Bigil out now in theatres, a fun-filled teaser has been released from Kathir's upcoming film, Sarbath, which has him playing a youth from a small town alongside comedian Soori and actress Rahasya as the female lead.

Produced jointly by Lalit Kumar’s Seven Screen Studio and Viacom 18 Studios, Sarbath has been directed by Prabhakaran and includes Ajesh Ashok scoring the music, T. Prabhakaran handling the cinematography and G. K. Prasanna taking care of the editing. Sarbath being billed as a rural entertainer is set to cater to audiences, especially in the B and C centers across Tamil Nadu.

Check out Kathir’s Sarbath teaser below:

People looking for online information on Kathir,Rahasya,Soori,Aanusri will find this news story useful.