"Whether you like it or not, I love you": Vanitha's emotional statement 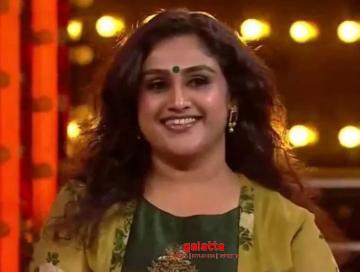 Actress Vanitha Vijayakumar’s career and personal life has seen through several major controversies over the years. She was announced to be one among the sixteen contestants to participate in the recently-concluded third season of the smash hit Tamil reality TV show, Bigg Boss, hosted by Kamal Haasan. A major crowd puller, Vantiha’s antics on Bigg Boss as well as her outspoken nature fetched her a major fan following before she went on to be evicted from the show twice. Having said that, Vanitha, who has since been quite active on Twitter and has been interacting with her followers, tweeted out her wishes to her brother and actor, Arun Vijay, on the occasion of his birthday. Vanitha stated that all indifferences between them can be sorted out as they belong to one family and will continue to love him. Check out the tweet below:

Despite Malaysian heartthrob, Mugen Rao, going on to be adjudged as the winner of Bigg Boss 3 and popular choreographer Sandy announced to be the runner up followed by Losliya and Sherin coming in at third and fourth places respectively, Vanitha went on to become one of the most popular personalities to participate in the history of Bigg Boss Tamil till date. She will next be seen on a new show titled, Chandralekha, which will mark her television debut. As for Arun Vijay, who celebrated his 43rd birthday yesterday (19.11.2019), the star has a number of projects lined up among which are the action cop flick, Sinam, Moodar Koodam director Naveen’s Agni Siragugal alongside Vijay Antony, Boxer opposite Ritika Singh, Dhuruvangal Pathinaaru director Karthick Naren’s Mafia: Chapter 1 with Priya Bhavani Shankar and Prasanna and a yet-to-be-titled film with Gautham Menon, which is yet to be officially launched.