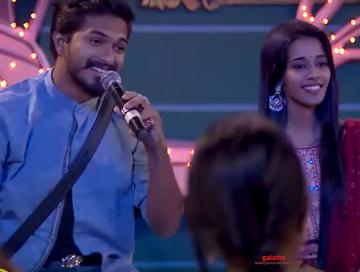 The first promo for today's (October 1) episode of Bigg Boss 3 is out and it is a musical promo. We know that Mugen is an independent musician and singer and his works are already a hit among the youngsters before entering the Bigg Boss house. In this latest promo, we see Mugen performing one of his songs in a musical set up, while other contestants are enjoying the musical treat. The promo has caught the attention of Mugen's fans on social media and this musical bit is doing the rounds on YouTube and Twitter.

It looks like the other housemates will also be given a chance to sing and perform in tonight's episode. This is the last and final week of Bigg Boss and by the end of this week, we will know who the title winner is. The show which started off with 16 contestants has now come down to 4 that includes Sandy, Mugen, Sherin and Losliya. Check out the promo here: