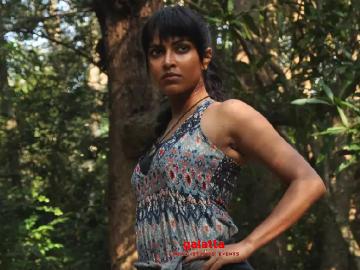 Dusky diva Amala Paul has had a great start to 2019 with her controversial thriller Aadai going on to become a highly talked about movie. She is currently busy with a number of projects in hand, one of which is the action thriller Adho Andha Paravai Pola, directed by debutante Vinoth KR. Bankrolled by Jones under the Century International Films banner. Reported to be an adventure thriller set in a forest, AAPP will be yet another female-centric movie for Amala Paul, following Aadai. The teaser of this movie was launched by Mohanlal and it gave us an interesting insight about the movie! Now, we have another update on this movie...

The makers have now released a poster of Adho Andha Paravai Pola with the release date being mentioned as December 27th! Even though it is releasing at the fag end of the year, it will mark Amala Paul's second release for 2019 and she has a lot of hopes pinned on this movie! Ashish Vidyarthi and Sameer Kochhar play important supporting roles in this movie, which has music by Jakes Bejoy with cinematography by Santhakumar C and editing by John Abraham. Ravindhar Chandrasekararan's Libra Productions banner would be distributing this movie.

AAPP looks to be set in an interesting premise as the teaser started off with the words - "This world is a jungle. You either fight or Run forever"! The teaser shows Amala Paul on the run from some dangerous people and situations. The title of AAPP has been borrowed from a famous song from the legendary MGR's movie Aayirathil Oruvan. Amala Paul has quite a few other projects in hand, including the Telugu remake of Lust Stories, the Malayalam movie Aadujeevitham and Cadaver, which she is co-producing.