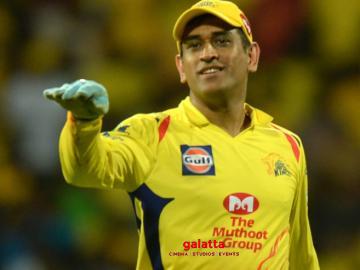 Cricket and Cinema are followed as passionately as religions, in India. The masses ardently take note of every single happening in these two fields and these set off polarised opinions too. The Indian Premier League (IPL) is one of the most followed and world famous T20 tournaments and the local team - Chennai Super Kings (CSK) has a heavy following. CSK, lead by the charismatic MS Dhoni, are two time IPL Champions and came close to becoming winners last time too, only to stumble against Mumbai Indians, in the final. Even last year, the CSK team was highly criticised and ridiculed for having very old players, most of them past their prime.

The IPL player auction was held recently and CSK roped in 3 players in Piyush Chawla, Josh Hazlewood and Sam Curran. Piyush Chawla, an IPL veteran, has not been in good form over the last couple of years and he was released by his previous team, after last year's tournament. CSK bid fiercely for Chawla and bagged him at Rs. 6.75 Crores, making him the highest paid Indian buy. This sparked off a lot of debate on social media, as the CSK team already has a plethora of spinners in Imran Tahir, Harbajhan Singh, Karn Sharma, Ravindra Jadeja and Mitchell Santner. However, Chawla could have been bought as he is a leg-spinner with lots of experience and also as he is one of the leading wicket takers in the IPL. He has earlier played for both Kolkata Knight Riders and Kings XI Punjab.

Among the many social media posts is one from director CS Amudhan, which has been becoming very popular. The director has penned his own version of explanation for CSK's unique player picks at the recent auction and people have been fiercely commenting on this post. Not many have seemed to understand that this statement is purely sarcastic and has taken a dig at the selection rather than the people thinking of him supporting it. He even compared Dhoni and Fleming to the mythological Arjuna and Krishna and mentioned that they pick older foreign players and uncapped Indian players to ensure that the team's secrets are not exposed to foreign teams and also to nurture the young Indian talents.