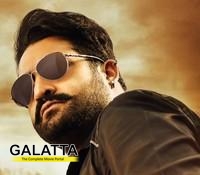 Three brothers; one good to the core, one street smart and one the bad guy - NTR jr as Lava, Kusa and Jai rules every frame of this movie.

The three brothers are a part of a drama troupe. Jai's stammering results in him becoming the butt of jokes by his brothers. The insults give rise to a seething anger and hatred for his brothers. When the boys lose their mother in a fire accident and are separated, each goes his own way. Lava grows up to be a bank manager, Kusa a crook and Jai becomes Ravana!

As it happens in all 'separated brothers story', Lava and Kusa meet by accident and decide to swap places to get out of their respective problems. But then when the bad guy in this story is their brother; it would not be an easy way out for Lava and Kusa. Will Jai help his brothers or will the bad feelings of the past conquer over blodd relations? Will the brothers come together to fight the real villains, forms rest of the story.

‘Nenu maha natunni ani audience lo positive reaction undhi’ says Kusa in the movie, and NTR Jr makes true every single word. He carries the movie over his shoulders and how. Each of the character he plays are different in style, mannerisms and makes us believe that there are three different people on screen.

The rest of the cast which includes Raashi Khanna, Nivetha Thomas, Ronit Roy and Sai Kumar, does get lost in such a huge screen presence, but they do justice to their roles. Pre-interval the movie is a fun and entertaining ride, while the second half is full of emotional moments. the climax is not the usual filmy climax that we see and the director has tired to make it realistic.

NTR jr fans may be a bit disappointed with the ending, but given how the actor makes this movie larger than life, his fans will forgive director KS Ravindra.

Rest of the cast is lost in the three NTR Jrs., but with such a huge star presence this is expected.

Verdict: Usually just one reason is enough to watch a movie, Jai Lava Kusa gives three. There is not a dull moment; definitely a perfect festival weekend movie to watch.

Jai Lava Kusa is a Telugu movie. are part of the cast of Jai Lava Kusa. The movie is directed by Music is by . Production .