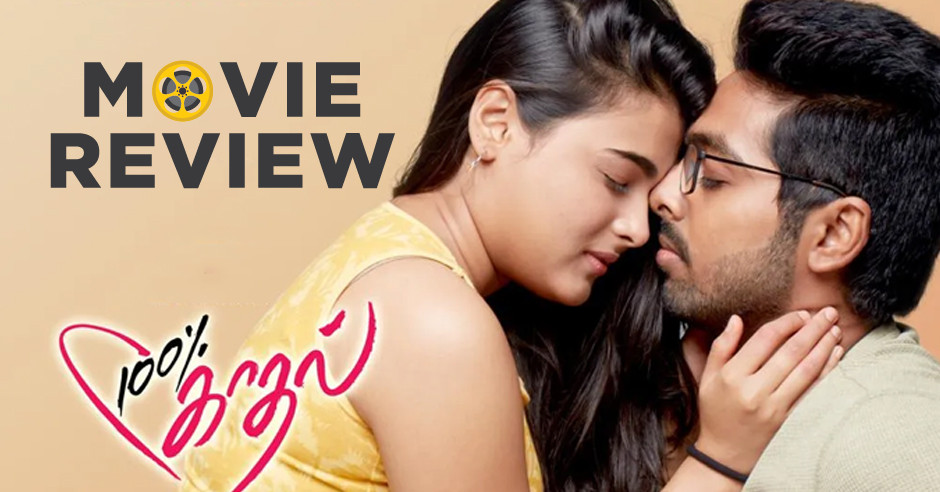 The story of 100 % Percent Kaadhal starts of at a bar where Balu (GV Prakash) is in a wedding outfit and soon he starts narrating his love story to the people in the bar and that’s how the story unfolds. Balu, a super intelligent top-rank student in his college. Mahalakshmi (Shalini Pandey), his cousin comes to Balu’s house to continue her studies. Mahalakshmi tries to impress Balu by getting the top rank which only creates more confusion between the two. Balu is egoistic and doesn’t want Mahalakshmi to admire anyone but him. Will their respective egos let them join together or not is what 100% Kaadhal is all about!

GV Prakash plays a fun-filled character called Balu with a mental complex in 100% Kaadhal. The spectacles and the trimmed beard suited the character very well. It is a tailor-made character for him. His diction and accent have also changed in this film and it sounds little different from his other ones. Shalini Pandey looks fabulous and is an asset to the movie. Her traditional hairdo in the beginning is not attractive, but she is gorgeous when she lets her hair loose in the latter part of the movie.

100% Kaadhal is an attempt to be slotted as a youthful entertainer, but since the making and treatment looked so artificial, we cannot empathize with the characters. In the end, both Balu and Mahalakshmi come across as a dumb couple who aren’t matured enough to understand reality.  Be it the dialogues or the overall presentation, everything about the film looked very superficial. You feel the film would have gotten over in 30 minutes had Shalini said ‘you are great’ to GV Prakash in the beginning itself. You are made to sit through 120 minutes just because a girl couldn’t say those 3 words. Of course, the script turned out to be successful in Telugu but this version is hard to sit through.

Maybe the start wasn’t that bad as you wonder what was going to happen but once the ego hassles of the lead characters come to the fore, the director needed an all new magic trick to the keep the audiences hooked. Unfortunately, he couldn't find one. Simply put, it reminds us of Khushi, and many other such movies where ‘ego’ seems to be the problem between the couple, who just can’t find enough ways to express their love.

The entire writing for the first half of the movie is taken from the college life and is wrote in an un-realistic and un-entertaining way. It looks more like a juvenile love track that takes place between two school children. The family angle is brought only in the second half to bring all-roundness to the commercial aspect of the script. Heroine character that enters as nobody into the life of hero starts getting mature, intelligent, magnanimous and sexy as the story progresses. The reason for all these is explained only towards the end. Nothing in the film is convincing, be it the conflicts between the leads, or the separation of their grandparents, or the professional angle of GV Prakash.

Anushka Shetty And Keerthy Suresh In The Same Film

Time To Rejoice For Keerthy Suresh And Samantha Fans!

The Arrangement For Keerthy Suresh And Samantha In Nadigaiyar Thilagam