Popular Tamil actress Yashika Aannand is recovering after she and her friends met with a car accident on July 25. One of the actress and Bigg Boss Tamil season 2 star's friends, Pavani Valicheti, succumbed to her injuries and passed away on the spot. Yashika, who has been undergoing treatment at a hospital in Chennai, has since released statements on social media about the accident, while also addressing the various rumors and dismissing the allegations that she was drunk while driving the car.

With reports stating that cases have been filed against Yashika for overspeeding and section 304 A of IPC (causing death by negligence) with her driver's license also apparently getting taken away, a photo of the actress in the hospital is now doing the rounds on social media. Yashika had sustained heavy injuries during the accident and underwent a few surgeries after multiple fractures on her pelvic bone and right leg. Several fans turned emotional upon seeing Yashika’s state in the hospital bed and are praying for her speedy recovery. Below is Yashika's photo from hospital: 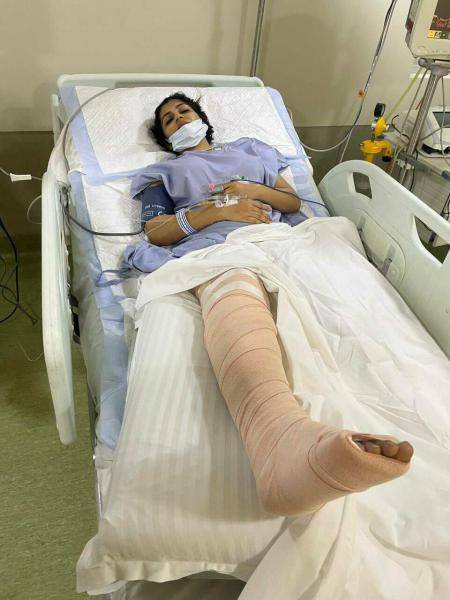 On Sunday, Yashika took to her Instagram page and shared an update on her health and expressed her gratitude to fans for their prayers. She wrote, "Apart from all the negativity, I'm grateful for all the prayers and well wishers. Thankyou for your care n love." Yashika continued, "Health update : -Multiple fractures in pelvic bone and right leg fractured . I'm resting post my surgeries. I won't be able to walk or stand for next 5 months . I've been bed ridden all day and I have to pass motions on the same bed . I can't turn left or right also . I've been stiff for these many days . My back is fully injured . Luckily nothing happened to my face but this is definitely a rebirth for me . Which I dint ask for A Mentally and physically I'm injured. God has punished me . But this is nothing compared to what I've lost."