For a while now, there has been plenty of talk and excitement over the number of films releasing this Diwali as ‘Thalapathy’ Vijay’s Bigil, Karthi’s Kaithi and ‘Makkal Selvan’ Vijay Sethupathi’s Sanga Thamizhan were announced to be coming out. That said, an official statement from reputed production and distribution house, Libra Productions has now come out regarding the upcoming Vijay Sethupathi starrer. Taking to their Twitter handle, Libra Productions, who have acquired the Tamil Nadu rights for Sanga Thamizhan, announced that the commercial action entertainer is no longer be a Diwali release and will instead be coming out in theatres either on November 8 or November 15. Check out their complete statement below: 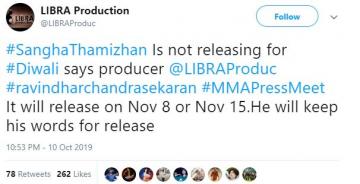 Vaalu and Sketch fame director Vijay Chander is returning with Sanga Thamizhan starring Vijay Sethupathi in dual roles for the first time in his career alongside Raashi Khanna and Nivetha Pethuraj as the female leads under the esteemed Vijaya Productions banner. With Sun Pictures acquiring the broadcasting rights for Sanga Thamizhan, there has been plenty of excitement surrounding the film as it will also see Vijay Sethupathi’s daughter, Shreeja, making her acting debut following the superstar’s son, Surya Sethupathi, in Naanum Rowdydhaan and Sindhubaadh, released earlier this year. The film also has a highly talented technical team featuring names like Vivek-Mervin scoring the music, R. Velraj handling cinematography and Praveen K. L. taking care of editing.