Politician and director Seeman recently filed a plagiarism case against director Lingusamy at the South Indian Film Writers Association. He claimed that the story of Lingusamy's next film with Ram Pothineni is very similar to his story, 'Pagalavan', that he had initially written for Thalapathy Vijay. Due to various reasons, Pagalavan did not materialize with Vijay and Seeman also eventually got busy with his political commitments. Recently, Seeman filed his complaint against Lingusamy and the Primary members of the Writers association investigated the case. After hearing both the sides of the story, South Indian Film Writers Association has now issued a statement confirming that no action can be taken against director Lingusamy since he has not violated any rules.

The same complaint was filed by Seeman against Lingusamy in 2013 when he felt that Lingusamy's story was similar to his Pagalavan story. The case was amicably resolved at that time and Lingusamy eventually wrote another story and made Anjaan with Suriya. After 8 long years, the same case has now popped up and the Writers Association has confirmed that they will not take any action against Lingusamy since he has not violated any guidelines. However, it is said that the similar storyline of both the stories are nothing but, mere coincidence. This incident has created a huge buzz on social media and this latest statement from the Writers Association will come as a relief for Lingusamy.

Director Lingusamy's next film will have Ram Pothineni and Krithi Shetty in the lead roles. The film will have music composed by Devi Sri Prasad. The shooting of this untitled project will begin on July 12 and the film has got solid expectations among the fans. Tentatively titled as #RaPo19, this film is planned to be made as a bilingual, in Telugu and Tamil. The dialogues for the Tamil version is penned by Brinda Sarathy. For now, check out the official statement from the Writers Union regarding the Pagalavan story controversy here: 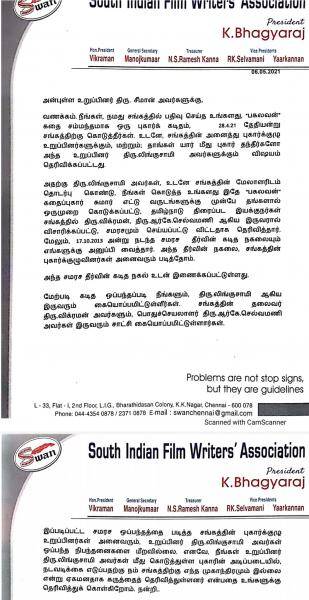 This much loved celebrity couple blessed with their second child - wishes pour in!

Check out the intriguing teaser of Amala Paul's next - super hit director's next!