Popular Bollywood actor Rannvijay Singha and his wife Prianka announced the news of the birth of their second child, a baby boy, on Monday night. Taking to his Instagram, the VJ turned actor shared a picture on his Stories announcing the birth date of their newborn. Rannvijay later posted another picture of a little jersey with a pair of tiny sneakers along with a football emoji. He captioned the post, "#satnamwaheguru", with wishes from many leading personalities soon after pouring in. 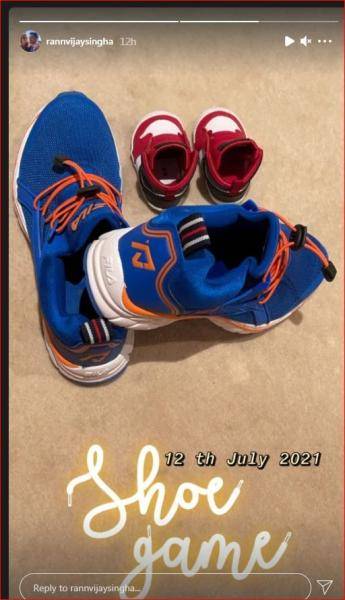 Among the celebrities who sent in their wishes to Rannvijay Singha and Prianka, VJ Nikhil Chinapa wrote, "Congratulations guys! Sending you all our love for Kai's little brother and the new addition to your lovely family." Actress Neha Dhupia, who collaborated previously with Rannvijay in Action Replayy and Roadies, commented, "Yayyy! Best news ever. Congratulations Rann, Pri and Kai." Bigg Boss 7 winner Gauahar Khan said, "congratulations", while Kishwer Merchantt, Prince Narula, Varun Sood, Mahhi Vij and several other TV stars also sent in their hearty wishes.

Rannvijay Singha and Prianka announced earlier this March that they are expecting their second child. Introduced to each other by a friend, their relationship blossomed into love and the couple entered wedlock in 2014 and were blessed with their first child, a daughter, Kainaat, in 2017. Rannvijay became a sensation across the country after appearing on the smash hit reality show MTV Roadies, while also gradually turning host on Splitsvilla. He is currently the presenter on MTV Splitsvilla 13 and has also starred in the Netflix series, Mismatched. Rannvijay has also appeared in a few notable Bollywood films such as the Salman Khan and Ajay Devgn starrer London Dreams (2009) and Action Replayy featuring Akshay Kumar and Aishwarya Rai Bachchan.