Priya Prakash Varrier became a national sensation in 2018 for her wink that garnered her a massive fan following across the country. Post the special wink in the 'Manikya Malaraya Poovi' song from her Malayalam film Oru Adaar Love under Omar Lulu's direction, Priya's popularity skyrocketed instantly overnight, with commercial endorsements and film offers following suit in quick succession. Seen since then alongside Nithiin and Rakul Preet Singh in the Telugu film, Check, Priya Prakash Varrier is at present awaiting the release of her upcoming Ishq - Not A Love Story, which has been announced to hit screens on July 30.

As Priya Prakash Varrier is also set for her big Bollywood debut with Sridevi Bungalow and Vishnu Priya in Kannada, the actress has been holidaying with her friends in Russia over the past few days, while also sharing her vacation experiences via a number of fun videos. That said, a few photos, videos and vlogs posted by a few of her friends showing the actress partying, crying and laughing, have fetched her unnecessary comments on social media, who has issued a statement on her Instagram Stories. Reacting to the trending videos, Priya Prakash Varrier wrote, "I’ve been watching bits and pieces of this vlog with my friends being circulated all over social media without any context. I appreciate everyone’s concern but it’s an unnecessary discussion as nothing was posted without consent. It’s being forwarded and shared all over Whatsapp, YouTube and TikTok with ridiculous captions and messages out of context. To all the media, please offer some authentic content for your audience next time. Most importantly, what I do with my friends and how I live my life is my very personal choice, so, feel free to keep your opinions to yourself." Below is a screenshot of Priya Prakash Varrier's statement on her Instagram Story: 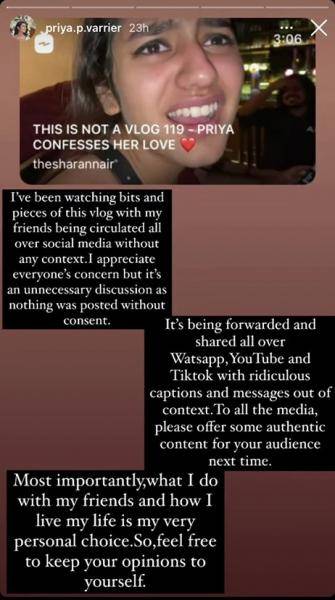