Priya Bhavani Shankar recently interacted with her followers and fans through her official Instagram page and she answered several interesting questions. During the interactive session, one of the fans asked her about her relationship status. Replying to that, she tagged her boyfriend Rajvel and wrote, "Yes let's settle this! Rajvel and I are 2 'super single' people clearing up my mess together!". Similarly, another fan asked Priya if she believes in the concept of love at first sight. Priya's reply was indeed interesting. She said, "I sincerely don't! But ironically I fell in love at first sight".

Well, it looks like Priya fell in love with Rajvel when she first saw him. Priya has expressed her love and affection for Rajvel in the past and the duo's pictures together have gone viral on social media. Priya, in one of her earlier posts, mentioned that she was surprised to see Rajvel stand by her after she entered the entertainment industry. Priya and Rajvel's love for each other is very much known by the people who follow them on social media and the actress' latest replies are a reflection of the same.

On the professional front, Priya Bhavani Shankar is a busy actor who has various exciting projects in her lineup. Priya Bhavani Shankar has already completed the shooting and waiting for the release of movies like Kuruthi Aattam (Atharvaa), Oh Mana Penne (Harish Kalyan), Bommai (SJ Suryah), Hostel (Ashok Selvan), Kasada Thapara, and more. While Kasada Thapara is rumoured to have a direct OTT release, the plans of other films are yet to be known.

Her other notable films which are in different stages of production include Pathu Thala (Silambarasan TR - Gautham Karthik), Rudhran (Raghava Lawrence), AV 31 (Arun Vijay), and an untitled film directed by Sarjun KM of Airaa fame. Priya is also a part of ace director Shankar's next, Indian 2, starring Kamal Haasan and Kajal Aggarwal in the lead role. For now, check out her latest statement about her relationship here: 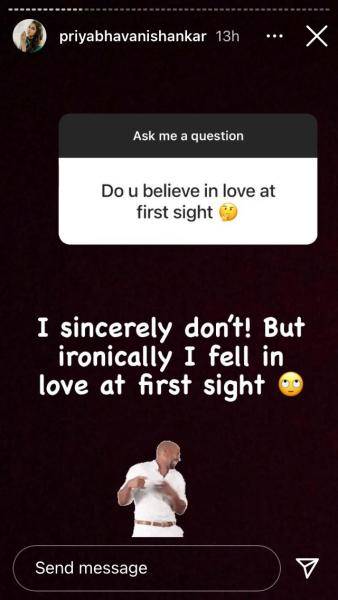 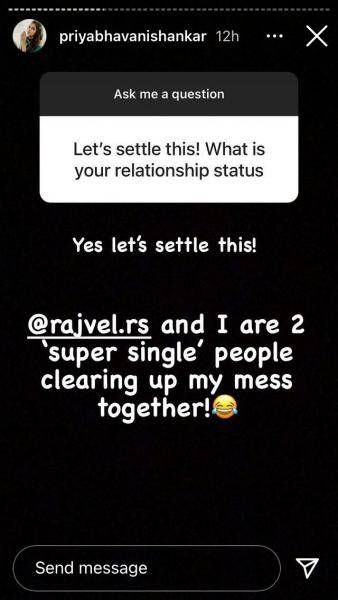