Director Atlee and Priya Atlee can be called as one of the most loved celebrity couples in Tamil Nadu and the duo shares beautiful chemistry. Priya, who rose to fame after acting in Vijay TV's Kanaa Kaanum Kalangal serial, got married to director Atlee in 2014 and there has been no look back since then. Priya and Atlee were in a relationship for quite a long time before entering wedlock. Priya has been a strong pillar of support for Atlee. The talented actress recently hosted a Q/A session on her official Instagram page and during the interaction, she answered quite a few interesting questions. One of the fans asked what she'd like to say to the people who hate her and Atlee.

Priya replied, "Thanks for loving us even more spread love". This reply from Priya has garnered good attention and the fans have extended their love and support to Priya's positive reply. During the interaction, Priya Atlee also shared a few unseen and throwback pictures of her with Atlee and the pictures have gone viral among the fans. Director Atlee, on the professional front, is currently busy giving final touches to the script of his next film with Bollywood Superstar Shah Rukh Khan.

During the summer of 2019, Shah Rukh Khan and Atlee met at the director's office in Chennai and the duo discussed the possibilities of collaborating on a project. We even saw Atlee and Shah Rukh Khan watching an IPL match together in Chennai and the pictures went viral on social media. Atlee's project with Shah Rukh Khan is touted to an action-packed entertainer and more details regarding the project are awaited. If things go as per plan, we can expect the film to be officially announced in the next few months.

After delivering 4 blockbuster hits in Tamil cinema, Atlee has now moved to Bollywood and let us hope that his debut Hindi film turns out to be a sensational hit. 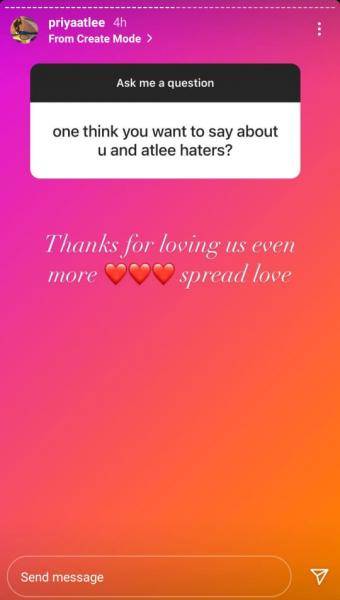