A film that has garnered massive acclaim across the country since its release in 2018, Andhadhun, in Hindi became a phenomenal box office success starring Ayushmann Khurrana as a blind pianist alongside actresses Tabu and Radhika Apte, with remakes in Tamil and Telugu as well subsequently announced. While the Tamil version Andhagan has Prashanth, Simran and Priya Anand as the lead trio, the Andhadhun Telugu remake was announced to have been titled Maestro, with Nithiin, Tamannaah and Nabha Natesh in the lead roles under Merlapaka Gandhi's direction.

Maestro being produced by N Sudhakar Reddy and Nikitha Reddy under their Sreshth Movies banner and presented by Rajkumar Akella has entered its final schedule of shooting in Hyderabad on Monday, with the team resuming production once again after the second wave of the COVID-19 pandemic. According to an official press release, the Maestro team is shooting scenes Nithiin and Tamannaah, which have been described to be crucial to the plot, with the team set to wrapping up filming completing after this schedule. Check out the announcement poster below: 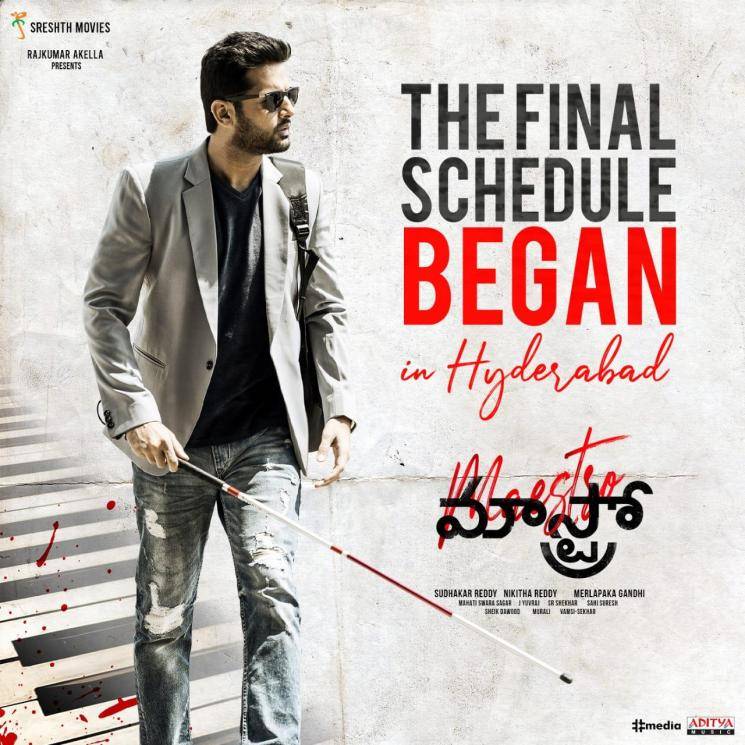 Nithiin is reprising the role of Ayushmann Khurrana in Maestro and has been paired opposite iSmart Shankar fame Nabha Natesh, who is playing the role portrayed by Radhika Apte, while Tamannaah has been cast in Tabu's role. The film's first look poster and teaser were released on Nithiin’s birthday a few months back to a  rousing response, with composer Mahati Swara Sagar who gave chart-buster album for Bheeshma, once again coming on board the leading Telugu hero's film for the second time.