WOW: Sivakarthikeyan and director Gautham Menon to team up for a new film. CONFIRMED.

Director Gautham Vasudev Menon is currently busy filming his next, Vendhu Thanindhathu Kaadu, that stars Silambarasan TR in the lead role. The film has got high expectations among the fans and it is expected to be contrastingly different from the Gautham Menon films that we've seen so far. Vendhu Thanindhathu Kaadu will be an action-packed entertainer which is based on a story written by Jeyamohan. The second schedule of the film is currently progressing in Chennai and the makers are shooting scenes featuring Simbu and other actors in this schedule. The film will have music composed by A.R.Rahman.

Meanwhile, details regarding Gautham Menon's next directorial film are out and we have some super exciting details for you. Going by the current developments, it looks like Gautham Menon and Sivakarthikeyan would be joining hands for a new feature film and the project is said to be in the early discussion stages. It is said that this new film will be bankrolled by Vels Film International and it is expected to go on floors by mid-2022, after the completion of Vendhu Thanindhathu Kaadu. Preethaa Ganesh, Vice President of Vels Group of Institutions officially confirmed the news through her Instagram page and it looks like an exciting project awaits us.

Preethaa Ganesh is the daughter of Ishari K Ganesh, the founder of Vels Film International. The film is currently in discussion stages and it looks like we will have to wait for a few more months for the project to take shape. Though a formal announcement on the film is yet to be made, this development of Sivakarthikeyan and Gautham Menon planning to come together is exciting and let us hope that the film materializes soon. Gautham Menon has two films lined up for release - Joshua: Imai Pol Kaakha and Dhruva Natchathiram.

Joshua is fully complete and ready for release and the film is expected to release in September, while Dhruva Natchathiram's progress is yet to be known. For now, check out Preethaa Ganesh's confirmation on the Gautham Menon - Sivakarthikeyan project here: 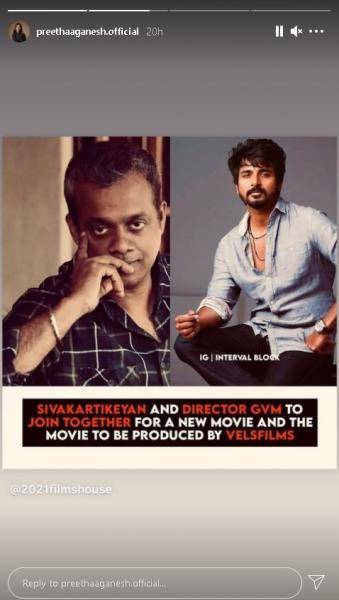