Cook with Comali sensation Pavithra Lakshmi recently interacted with her fans and followers on Instagram through a Q & A session in which she answered several interesting questions posed by the fans. One of the fans asked Pavithra about her thoughts on the recent phenomenal growth of Pugazh, who also got a massive breakthrough with Cook with Comali. Answering the question, Pavithra said that she is proud of Pugazh's growth and also added that he deserves this victory. Sharing a throwback picture with Pugazh, Pavithra wrote, "Always always always proud and happy for his growth. That man deserves to win the world for the amount of hardwork he puts in".

This emotional reply from Pavithra has now gone viral among the fans and has garnered good attention on social media. Pavithra and Pugazh are known to be one of the most loved pairs in Cook with Comali and the duo's moments have always brought a smile to the faces of the audiences. Pavithra Lakshmi will be making her debut in Tamil cinema as a lead actress with the upcoming untitled comedy entertainer, produced by AGS Entertainment. Featuring Sathish as the male lead, the film is directed by debutant Kishore Rajkumar and has music composed by Ajesh Ashok. The fans are eagerly looking forward to witnessing Pavithra's performance in the film.

The young actress will also be seen playing one of the leads in Yuki, an upcoming Tamil action drama, directed by Zac Harriss. Kathir, Narain, and Natty play the lead roles in Yuki. On the other hand, Pugazh has turned out to be one of the most sought after comedians in the Tamil industry and he has several exciting projects in his lineup. He will be seen acting in Ajith's Valimai, Suriya's Etharkkum Thunindhavan, Santhanam's Sabhaapathy, Vijay Sethupathi's VJS 46, Arun Vijay's untitled film with director Hari, Ashwin Kumar's Enna Solla Pogirai, and more. For now, check out Pavithra Lakshmi's latest trending reply about Pugazh here: 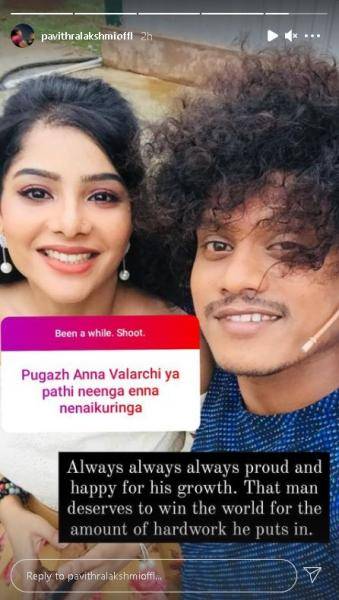 Seven-time Emmy Award winner and Up actor Ed Asner passes away at 91 - condolences pour in!

WOW: Sivakarthikeyan and director Gautham Menon to team up for a new film. CONFIRMED.