Veteran director and actor S.A.Chandrasekar has made an adult romantic comedy film featuring Jai, Vaibhavi Shandilya, and Athulya Ravi in the lead roles. Titled as Capmaari, the theatrical trailer of this film was released recently. The trailer was filled with double entendres with typical SAC touches in the visuals and the dialogues. There are two interesting aspects to notice in Capmaari; this will be SAC's 70th directorial project, while it will be Jai's 25th film as a hero. The makers have now released the video promo teaser of the song 'Ippadi Oor Inbam'.

This is a sensuously shot song and we see some hot intimate romance between Jai and Vaibhavi. The song is composed by Siddharth Vipin and crooned by Neha Nair with lyrics penned by Mohan Rajan. The video song promo has been released on the official YouTube channel of Lahari Music who owns the film's audio rights.

On the technical front, Capmaari has cinematography by Jeevan and editing by GK Prasanna. With an 'A' certification from the censor board, Capmaari is all set to hit the screens on December 13, coming Friday. For now check out the hot and sensuously shot video promo of 'Ippadi Oor Inbam' song: 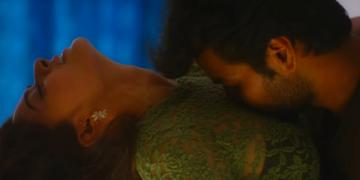