Arun Vijay gets injured shooting for his next film - Breaking statement!

Leading Tamil actor Arun Vijay is currently working on his next film, the tentatively titled AV 33, and is the first time he is teaming up with blockbuster director Hari of Saamy, Aaru and Singam franchise fame. The upcoming film touted to be yet another mass action entertainer is being filmed at Dhanushkodi, with the Yennai Arindhaal actor taking to social media on Friday evening to inform followers that he had sustained an injury on his hand.

In an Instagram Story, Arun Vijay posted a picture of himself from the AV 33 shooting spot while dropping a health update stating that he has been advised to not undertake any weight training for the next five days. The film kicked off production in Dhanushkodi towards the end of last month, with the Chekka Chivantha Vaanam star releasing a few shooting spot pictures in which he was seen with director Hari. Billed to be yet another rural film, expectations are massive considering it marks the return of Hari, with fans looking forward to witnessing him return to form after his Saamy 2 in 2018 didn't perform as had been hoped. Check out Arun Vijay's Instagram Story below: 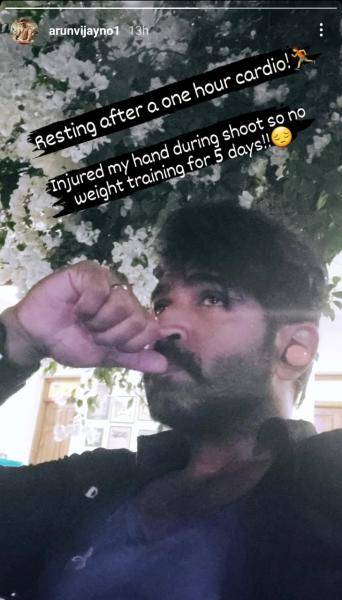 Keerthy Suresh shares new picture from the sets of Annaatthe - reveals her character look in the film!