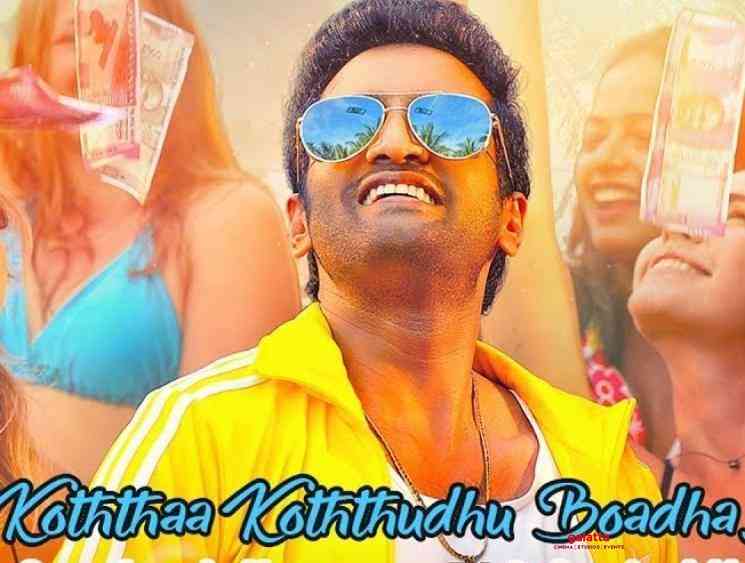 Santhanam’s next release in Kollywood would be Dagaalty, which is directed by debutant Vijay Anand, a former associate of director Shankar. Yogi Babu will be seen in an important role in the film and it will be the first time we would be seeing the two top comedians sharing screen space together. The second single from the film has now been officially released. This song is called ‘Koththa Koththudhu Boadha’ and it has been crooned by two top class music directors. Guess who? Well, Santhosh Narayanan and Govind Vasantha have lent their voices for this interesting number which is expected to impress the mainstream audience.

From the lyrics (penned by Subu) and the images seen in the lyric video, it looks like this is the intro number and the visuals will feature Santhanam and Yogi Babu partying together. The first single, ‘Paaren Paaren’ opened to a fair reception from the fans and music lovers and it is now time for the second single to take over the buzz. The film’s teaser got a wonderful response from the fans and Santhanam’s one line counters worked big time. Produced by SP Chowdhary's 18 Reels, Dagaalty features Rittika Sen as the female lead and has music by popular singer Vijay Narain, marking his debut as a music director.

Santhanam's last two films (A1 and Dhillukku Dhuddu 2) have got a good reception at the box office and the comedian turned actor will be looking forward to continuing the success streak with Dagaalty as well. The film is scheduled to hit the screens on January 31. For now, check out the ‘Koththa Koththudhu Boadha’ song from Dagaalty here: