Popular director of Vishal and Karthi films decides to quit - here's the reason! 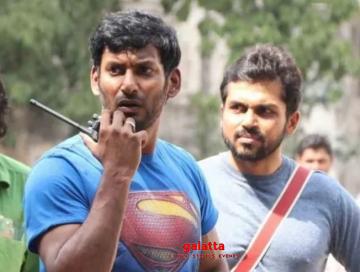 Director Suseenthiran has made a name for himself in Tamil cinema over the years for making films in quick intervals and has teamed up with several popular stars. He started off his filmmaking career on a bang in 2009 with the rural sports drama, Vennila Kabadi Kuzhu, and followed it up with the action thriller blockbuster, Naan Mahaan Alla, in 2010, which had Karthi and Kajal Aggarwal in the lead roles. Suseenthiran has also teamed up twice with Vishal for Pandiya Naadu in 2013 and Paayum Puli in 2015 with both ventures going to gain a following since their release.

In a career spanning well over a decade, Suseenthiran has gone on to make 12 films till date including the sports drama, Kennedy Club, starring Sasikumar and director Bharathiraja, earlier this year. That said, Suseenthiran has made a sudden decision to quit having a presence on social networking forums (Facebook, Twitter and Instagram) owing to his upcoming work commitments in cinema. The hit director took to his Twitter page to inform followers of this decision in a hand-written note and can be seen below:

As for his upcoming projects, Suseenthiran’s Champion starring Vishwa and Mirnalini Ravi in the lead roles with Narain Kumar, Manoj K Bharathi, V Jayaprakash in supporting roles has been announced for a December 13 release and has created quite a lot of buzz post the release of the film’s intense and action-packed trailer released a few days back. Suseenthiran’s romantic drama film, Angelina, with newcomers is also under development in its post-production stages and we can expect it to come out in early 2020.