WOW: Asin's daughter's latest picture goes viral - have you seen her yet?

Asin Thottumkal was a huge name in South India in the 2000s, especially among Tamil cinema fans, after her debut in 2004 opposite Jayam Ravi in M. Kumaran Son of Mahalakshmi. The highly-talented actress from Kerala went on to leave a lasting impression with her impeccable performance in Ullam Ketkumae before cementing her name as the darling of the masses in Suriya's Ghajini. Asin then landed roles opposite 'Chiyaan' Vikram in Majaa, including playing the female lead alongside 'Thalapathy' Vijay in blockbusters like Sivakasi and Pokkiri, 'Thala' Ajith's Varalaru and Kamal Haasan's Dasavatharam.

Having made a big mark in Tamil, Asin soon made a transition to Bollywood in 2008 opposite Aamir Khan for the Hindi version of Ghajini. She then landed roles in films like London Dreams, Ready, Housefull 2, Bol Bachchan and Khiladi 786, while her last major starring role was the Abhishek Bachchan starrer All Is Well in 2015. Likewise, it has been more than a decade since Asin was seen in Tamil film when she teamed up with Vijay once again in the 2011 box office smash hit, Kaavalan.

Asin has been missing in action after she decided to step away from films when she married Micromax co-founder Rahul Sharma in January 2016. Their union took place in a Christian wedding, which was then followed by a Hindu ceremony. The couple were blessed with a daughter on October 24, 2017, whom they have named Arin. Last year, Arin celebrated her third birthday, with pictures and videos of the celebration going viral on social media. Now, Asin has shared yet another cute picture of her three-year-old where she is seen taking part in a Kathak dance practice session. Sharing Arin’s picture on her Instagram story, Asin wrote, "Weekend Kathak Practice 3yr old". Check out the cute picture where Arin bears a striking resemblance to her mother: 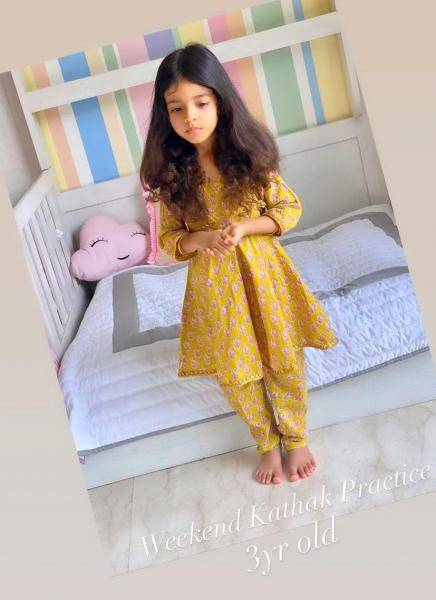 This young and talented director gets married - leading star heroes attend the event!