90ML actress joins Arya and Sayyeshaa's Teddy - check out who it is! 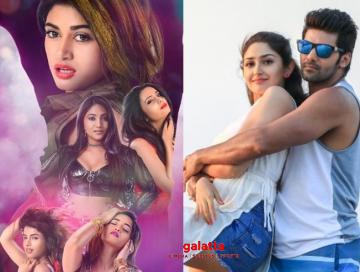 Arya and Sayyeshaa had gotten married earlier this year after they were first seen in last year’s rom-com, Ghajinikanth. Prior to the announcement of their wedding, it was revealed that the couple would be starring in the upcoming film, Teddy, under director Shakti Soundar Rajan. Being produced by K. E. Gnanavelraja and Aadhana Gnanavelraja under the Studio Green banner with music by D. Imman, Teddy will now also see actress Masoom Shankar in a major supporting role. Known for appearing in films like Nagesh Thiraiyarangam and the Oviya starrer, 90 ML, released earlier this year, Masoom Shankar has now completed her portions in Teddy alongside Arya, Sayyeshaa and reputed director Magizh Thirumeni, who as well will be seen in a starring role. Check out Shakti Soundar Raja’s announcement below:

There are plenty of expectations surrounding Teddy considering it will be the first time fans will get to witness Arya and Sayyeshaa as a couple on the big screen after their wedding earlier this year. Although they were seen in Suriya’s Kaappaan, the two were not paired opposite each other and Teddy releasing in 2020 will no doubt fulfill that purpose. Furthermore, director Shakti Soundar Rajan's ventures namely Miruthan and Tik Tik Tik have stood out in terms of being ambitious and contemporary and his direction skills will be an additional USP factor for fans to look out for.