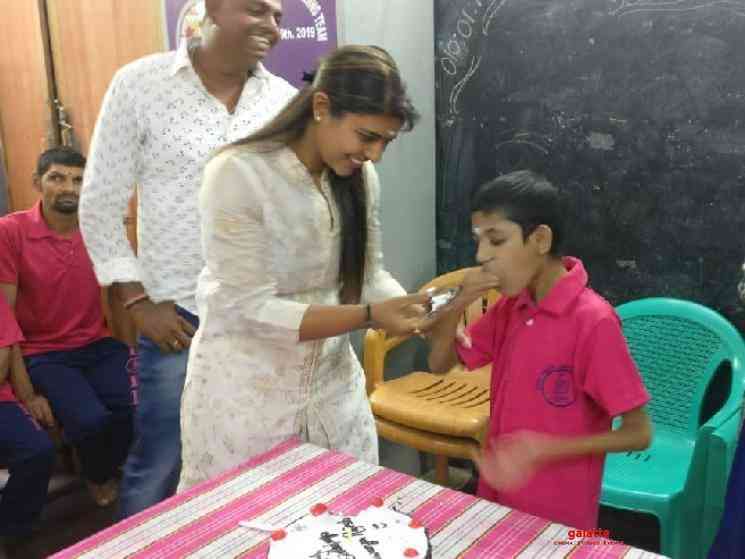 The highly talented Aishwarya Rajesh entered movies in 2010 but it was only five years later that her career took flight. Her performance in the 2015 movie Kaaka Muttai, shot her into the big league. Since then, Aishwarya is having her hands full with projects. She is now one of the most sought after actresses having proven her potential many times over. She is only going from strength to strength and every new movie of hers proves this. This lovely performer is celebrating her 30th birthday today and she has done it in her inimitable style!

Aishwarya Rajesh rung in her 30th birthday by celebrating it with underprivileged children at the Hope Public Charitable Trust, in Chennai. She cut a cake and fed it to all the children at the Trust centre and spent considerable time with them. While most celebrities throw lavish parties and celebrate their birthdays in style, this gesture from Aishwarya is truly heartwarming. She recently won a prestigious award for her performance in the 2018 movie Kanaa, in which she played a cricketer.

There are many of Aishwarya's movies which are ready to release. Her upcoming movie World Famous Lover, will see her pairing up with Vijay Deverakonda. Aishwarya will be one of the four heroines in this movie, including Catherine Tresa, Raashi Khanna and Izabelle Leite. The teaser of this movie was released recently and it has garnered Aishwarya a lot of praise. Her other upcoming projects inclue, Ka Pae Ranasingam, Vaanam Kottattum, Bhoomika and Tuck Jagadish. Dhruva Natchathiram, Idam Porul Yaeval and Idhu Vedhalam Sollum Kadhai are three of Aishwarya Rajesh's projects which have almost been completed but are awaiting release due to some unfortunate reasons. Galatta Media wishes Aishwarya Rajesh a very happy birthday and all success for her upcoming endeavours!