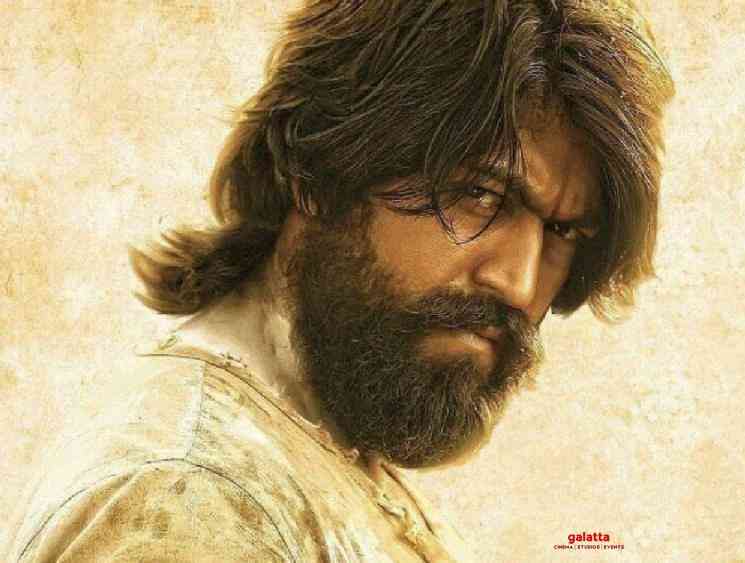 Yash has now become a pan-Indian star, thanks to the mammoth success of KGF: Chapter One. The second part is getting ready and the makers have planned to release the film on October 23, this year. KGF 2 is expected to showcase Rocky Bhai in a new dimension, with more action, fun, and mass. The fans are excitedly waiting for the d-day. Meanwhile, interesting news updates about his next film after KGF 2 is doing rounds on social media. According to the latest reports online, Yash is most likely to team up with director Narthan for a new film and the pre-production works are said to be in progress.

Additional update is that the makers have approached actress Tamannaah to play the female lead. Narthan made a strikingly impressive debut with the action thriller, Mufti, starring Dr Shiva Rajkumar and Sriimurali in the lead roles. He is currently committed to doing the Mufti remake in Tamil starring Simbu and Gautham Karthik in the lead roles. The film hasn’t seen any progress for the past few months and it has been a worry for the fans.

Probably, by the time Yash completes KGF 2 and gets ready, Narthan should have completed his project with STR and Gautham Karthik. If Yash teams up with Narthan, it is surely going to be an exciting treat for the fans and ardent film buffs. An official word on this project is awaited. Stay tuned. 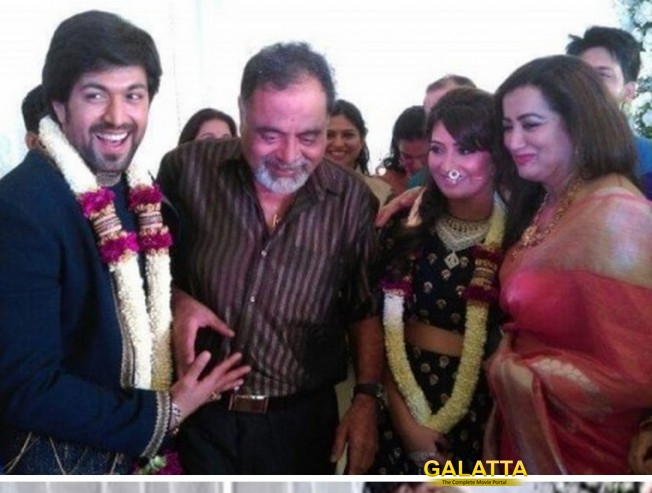 Popular actress Malavika Avinash has given a beautiful description of the much hyped engagement of Sandalwood’s lovely couple Yash and Radhika Pandit. The lovely couple got engaged in Goa and here is the visual diary posted by Malavika on social media about their gorgeous engagement.

"Please come akka, I know it's all too sudden but I want you to be there, will mean a lot to me...", he screamed on the phone. Puneeth who was seated next to me on the early morning flight exclaimed that Goa is indeed the celebration destination reminiscing some of his wonderful memories of the place. A bag of love-coated pop-corn along with the itinerary welcomed the handful of close family & friends that were at the Taj-Holiday Village at Goa on the 12th Aug 2016.

A beautiful altar soaked in white, by the Fort Aguada beach, foamy waves lashing at the shore, a serene fairy-tale like setting orchestrated with varieties of white flowers, roses, jasmine, Lillies, snow-white furniture by the very creative Arun Sagar. While the ever-so handsome, Yash in a navy blue Sherwani with a splatter of gold embroidery sat waiting with bated breath...I was ushered in by his joyous Amma who insisted that I do the aarti with his sibling Nandini for Radhe. Lo & behold, SHE breezed in with pretty looking friends & her gentle mother by her side...in a gorgeous navy blue art-silk lehenga choli with minimal diamond-studs & a shimmering nath! That's who they both are, simple yet beautiful! As I swung the arti to welcome her Angelic grace, she hugged & whispered into my ears,

"Have done this in movies so many times...but today Am Nervous"! As we all gushed she swayed up to the altar to be engaged to the love of her life. The priest uttered the mantras and love filled the air...Women performed the traditional rituals of madilakki tumbodhu, smearing of the arishina on her silky smooth cheeks, filling her forehead with Kumkuma, industry veterans like Ambareesh Sir & Ravichandran alighted to bless the most handsome couple of our business. And Rocking Star slid the rock on to his rock's slender finger & she sealed their love by adorning a specially designed one on his tough finger. Yograj Bhatru, Sadhu Kokila broke into an extempore version of the super-hit Annthamma penned specially to celebrate Yash & Radhika's love, not to mention K. Manju adding his bit of cacophony. "

Our Lakshmi has arrived", declared Yash's mother, the occasion also having coincided with Varamahalakshmi festival. My phone rang non-stop...every single news channel called with curiosity mixed excitement..."are you there? Can you tell us what it's like?"...yes, Yash is my kind of hero I said, while he fulfilled his love's desire of wanting a "I do", by the Goan beach where she hails from, he knows he will fill up the hearts of his fans amongst the multitude of Kannadigas with a wedding on a later date back home. Lunch was served! As I sat by the beach late in the afternoon after a quick snooze, I remembered how I had called to ask a friend if they were just more than hero-heroine while we shot for Bhatru's Drama! Although there was nothing in their dignified behaviour on the sets that suggested it, For me, it was my sixth sense insisting to me that there's palpable love. During Ramachari, I knew but was simply awed at the way both of them carried themselves...so absolutely professional & mature. No SMS-quarrels, no tears, none whatsoever that would affect the working atmosphere.

Two actors who are super-talented, superlatively dedicated & hard-working, yet completely unfazed by their super successful careers & stardom. The sun descended into the sea & the sun-deck lit up in neon...in came charm & enchantment...his arresting chivalry in a tux & her magnificent beauty in a long peach dress embellished with gold. As they cut their snow-white cream coated rich chocolate cake, he spread his warmth thanking the guests...And then it was "Annange love aagidhe..." Time! Karaoke renditions of old romantic songs by Sadhu & Sumaji, the dance floor came alive rocking till wee hours of the morning...missed holding Avinash 's(who was shooting) hand as I watched them slow-dance! yes! My favourite couple are Engaged!! 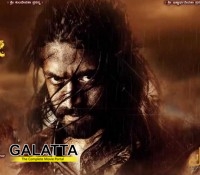 Super star Rajinikanth's Kochadaiiyaan was scheduled to hit screens on May 3, hence the makers of Gajakesari opted to release their film at the end of this month. After Kochadaiiyaan being pushed to May 23, Gajakesari makers are worried as it would may not bring in audiences to watch their film, which is all set to release on the same day.

Yash who plays the lead role in Gajakesari has revealed that he has full faith in his fans, who would make this film a huge success, despite any big release. He also adds, that he also a huge fan of Rajinikanth and wishes success for his grand release too. 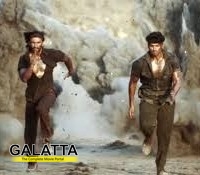 Director Ali Abbas Zafar is excited and emotional about his latest release Gunday.

The director has decided to give the late ace filmmaker Yash Chopra, a tribute in this film. One reason being that, this was the last script Chopra ji read. The other reason is that, Chopra ji gave in a lot of inputs to Zafar for this film. He also insisted that, based on coal mine smuggling, the film should be shot in an actual location, rather than a set, which was in fact his dream to do in his film, Kaala Patthar.

Paying a tribute to the great man who breathed his last in 2012, Zafar has dedicated the first 60 seconds of the film, to him. 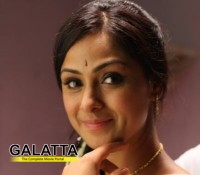 Simran says, “I would have worked with Yash Raj Films had they entered southern cinema before my marriage. I would have definitely done a few more films. I missed working with them." 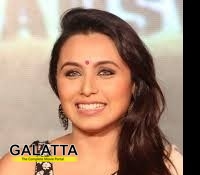 Yash Chopra's 81st birthday remembrance event was not just a glamorous one but even an emotional one.

Amongst all the nine ladies who walked the ramp with Shahrukh, Rani Mukerji, who has no only been one of Yash ji's top actress but also close to his family, broke out while giving a speech.

"Yash uncle I miss you a lot...please forgive me for not making cake for you last year as I was busy with my commitments...I miss you and we all love you,” she said in tears.

Besides, we all know Rani and Yash ji's elder son Uday have been in a relationship for a long time now. 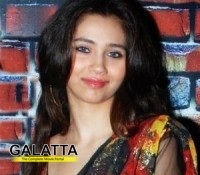 The debutant confess, that she is a huge fan of Yash Chopra's romantic film. Kabhie Kabhie, Dil Toh Pagal Hai, DDLJ and Veer Zaara have been her all time favourites. She feels that no one can ever paint romance the way Yash ji did. Well, we agree on that Sasha! Talking about debut, she is honoured to have made her big step under the Yash Raj Films banner.

The actress has a very positive feeling about the film, as she has not only acted in it but also sung for the film.

The film is set to release on May 17. 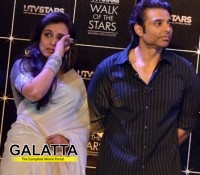 Rani Mukerji has always been close to the Chopra clan, ever since her debut in films. She also called Yash Chopra as her guide, who helped her choose several hit films in her career.

The actress was present along with Yash Chopra's family and friends to unveil the statue of this late legend. Soon after the function started, the actress broke down into tears, when everyone started to say golden words about the star director. But, there are reports that she was shocked when at the event, actor Shatrughan Sinha addressed her as Rani Chopra, confirming the rumors of her dating Yash's elder son Aditya Chopra as true.

Well, only Rani has to confess what was behind her teary eyes. 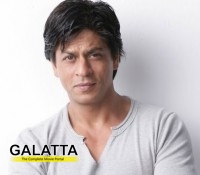 Shahrukh Khan and Yash Chopra remained very close friends even since, SRK's debut in the industry. SRK was also working with Yash Chopra in his last directorial venture, till days before his demise.

Hence, the actor has decided to pay tribute to the legendary filmmaker. SRK will be seen doing a phenomenal performance for the ace director at the Zee Cine Awards, which is likely to take place in January.

Shah Rukh will miss Yash ji during his Diwali release! 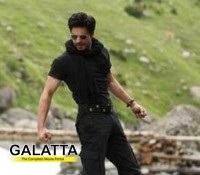 With the entire Bollywood upset over the loss of Yash Chopra, Shah Rukh Khan seems to be missing him more.

Shah Rukh who is all excited about Jab Tak Hai Jaan's Diwali Release, is sad as he will miss him at the time of the film's release. Knowing Yash ji for 20 years, Shah Rukh says he had a healthy lifestyle.

Yash ji's demise proves that no matter how popular or simple you are, one day life will come to an end, says Shah Rukh. However he is glad he had a peaceful death.

We will all miss him and his movies!