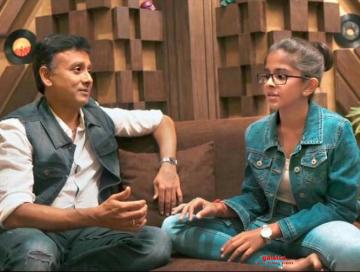 Acclaimed National Award-winning singer, P. Unnikrishnan, has gone on to become one of the most prominent singers in India and also a celebrated voice in South Indian cinema. Having shared the National Award in 1994 for his for two songs, 'Ennavale' from Kadhalan and 'Uriyum Neeye' from Pavithra (both songs composed by A. R. Rahman), his daughter, Uthara Unnikrishnan went on to receive the coveted award in 2015 at the 62nd National Film Awards for the song ‘Azhage’ from the 2014 Tamil film, Saivam, composed by G. V. Uthara had recorded the song when she was 7 years old and received the award at the age of 10, becoming its youngest recipient. That said, Uthara Unnikrishnan has now been presented with the “Most Promising Voice” award at the Rotary Club of Madras, T. Nagar in the presence of Rtn. K. V. Kathiravan, the Director Club Service Rotary Club of Madras and Rtn. Shankar, President of Rotary Club of Madras and her father, Unnikrishnan.

Uthara later crooned the ‘Eena Meena Teeka’ song in ‘Thalapathy’ Vijay’s 2016 blockbuster film, Theri, and has since gone on to become a popular name among fans in Tamil Nadu. As for Unnikrishnan, the reputed singer too was conferred with a special award for being the “Best Role Model” by Mr. Y. G. Rajendran at the Rotary Club of Madras, T. Nagar. Check out the picture below: 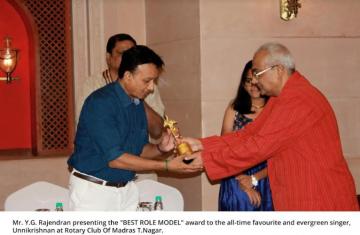