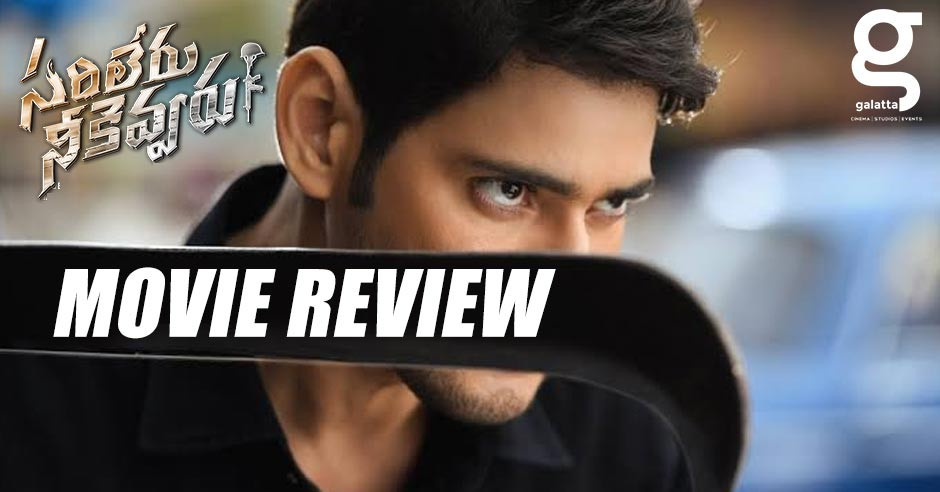 Sarileru Neekevvaru, a social drama directed by Anil Ravipudi hits the screens today. With a huge ensemble of support stars and Rashmika Mandana playing the female lead, does Sarileru Neekevvaru live up to the immense expectations? The film does follow the tried and tested commercial Telugu film template with mass and comedy taking the front seat. Anil Ravipudi wastes no time to establish what type of film the audience has paid for, driving the proceedings forward with plenty of fun moments and equally attractive mass scenes to keep the first half engaging.

Mahesh Babu as a highly-skilled army official fights against terrorists in the initial parts of the film, then his journey takes him to Kurnool district where he gets into combat with a powerful politician. He in the company of his sidekick, played by Rajendra Prasad give us a few laughable moments now and then but Anil knew how to blend all the commercial elements perfectly. He had put the comic side of Mahesh Babu to good use, this role is sure to open up more avenues for the actor who is largely looked up for his looks, charisma and stunts. Watch out for the scene where the MB tackles Rashmika and his family with his cute expressions. The dialogues are powerful at places and Mahesh Babu delivers them nonchalantly.

Post Srimanthudu, Mahesh Babu seems to have understood his audience very well. He doesn’t feel to experiment much with the story but offers exactly what his fans want. In fact, all Mahesh Babu films have the same stories off late, he comes from a powerful urban background, then travels to a village and solves the problems in that locality. This way, he can attract both the city as well as rural film audiences. Sarileru Neekevvaru is no different, here he comes from Kashmir to Kurnool and faces a powerful villain. It is just the same story as Srimanthudu and Maharshi but the screenplay in the first was largely fresh and engaging while the director plays it to the gallery in the second half.

Anil Ravipudi has cracked the formula to cover all the family audience, though the comedies and romance portion may seem force-fitted, they are sure to work well with the masses. Dialogues like ‘never beforeu, never afteru’ are likely to be heard more from your neighbours once they watch this film. One could see the amount effort Anil has put in to make this comedy portion work. However, the second half gets very predictable and uninteresting. The reason for that is Mahesh Babu doesn’t have a worthy opponent. And the patriotism angle in the film was a little superficial and preachy.

The artwork by Suresh Selvaraj looked unbleached and adds value to the script. Not an easy deal to recreate a slum set like the way he has done. Rathnavelu’s visuals provide the much-needed grandeur look to a social-oriented masala script as such. The army portion had a natural and lively treatment while the song sequences turned out to be a treat to our eyes. Devi Sri Prasad might have lost the battle with Ala Vaikunthapurramuloo in terms of the songs but he proves that he is still at the top of his game with regards to the background score.

Mahesh Babu’s romance track with Rashmika did change the colour of the film, he made sure that the film wasn’t raw but lively. Vijayashanthi who makes a comeback after 14 years has a decent part to play. The 90’s ‘Lady Superstar’ was used pretty effectively and she fits the bill perfectly with her subtle and gritty expressions. There are also many experienced actors like Prakash Raj, Sangeetha, Ramesh Roa and Rajendra Prasad playing out little roles in the overall scheme of things. The length of the movie is a downer, maybe the second half could have been crisper. On the whole Sarileru Neekevvaru has an average script with some exciting moments backed by Mahesh Babu’s charisma.

Rashmika's New Cute Promo Video From Sarileru Neekevvaru Is Out!