SS Rajamouli's ‘RRR” is an entertaining masala epic with great star turns, but deeper emotions might have made this even better 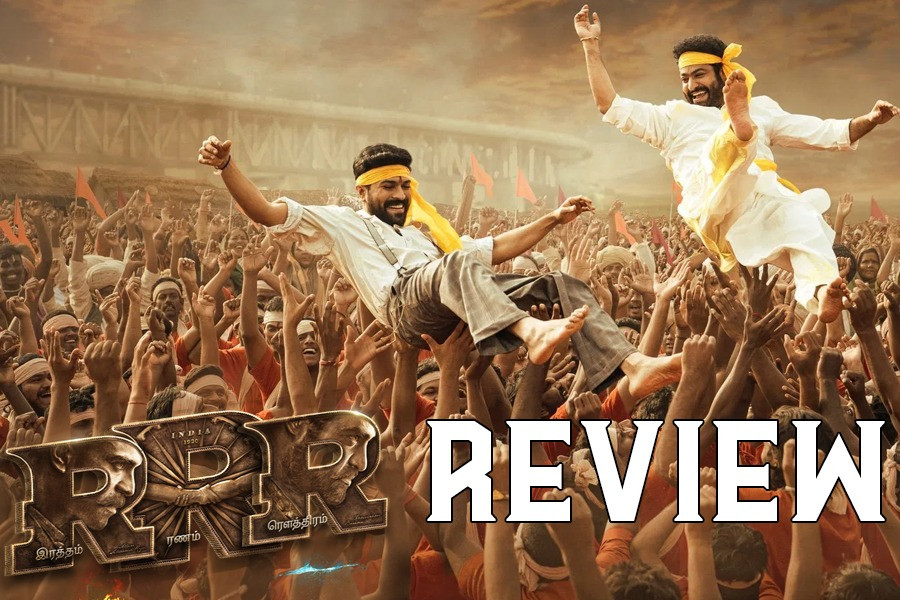 Rajamouli's cinema is not just masala cinema but also mythological cinema. So he shapes Komaram Bheem like the Bheema from mythology, and Alluri Sitarama Raju like Lord Ram.

SS Rajamouli's much-awaited mega-epic: RRR, is set in 1920s India. The film stars NTR Jr as Komaram Bheem and Ram Charan as Alluri Sitarama Raju. These are real-life revolutionaries but RRR is not real. It is what you'd call historical fiction.

RRR may have three words in its title, but it is a movie of twos. There are two heroes, both of whom are in top form. There's NTR Jr, who is defined by water. He is an innocent man from the Gond tribe. The feelings in his face are as clear as water but when required, he can turn into a tsunami. And then there is Ram Charan as Ram, who is defined by fire. He smoulders inside and you don't want to be anywhere near him when he rages. But when required, he can be a matchstick flame, spreading gentle warmth, like he does when he becomes friends with NTR Jr.

The story is about their friendship - but with a twist. After all, can fire and water really be friends? But both have a mission, which remains separate till the end. The only thing is that both missions involve the British.

There is a superb scene where a man picks up a grenade with his arrow and fires it as a missile. We have seen arrows before. We have seen grenades before. But have you seen both together? That is a perfect metaphor for SS Rajamouli. He takes plots and events we have already seen – that's the arrow – and he attaches a grenade to it. That grenade is his secret touch, which makes the scene on paper look magnificent on screen.

Take the scene where NTR Jr and Ram Charan become friends. Now Ram Charan has been introduced in a scene involving fire and NTR Jr has been introduced in a scene by a river, water. But when they come together as friends, the scene involves both fire and water. And afterwards, they don't just shake hands. They clasp their arms while swinging in mid-air.

This is one example of the Rajamouli grenade. Very few in India understand masala cinema like him, and fewer still take it as seriously as he does. Because see the interval portion, where the friends turn foes. It is staged very similarly to the scene where they became friends. They are still holding hands and one of them is hanging in mid air. In masala cinema, this is called an echo moment – and RRR is filled with these echo moments.

After a dance scene, Ram carries Bheem on his shoulder. And when the reverse happens - i.e., when Bheem carries Ram on his shoulders - it is a war scene. A man backstabs someone. Later, this man is backstabbed by a tree, which is treated like a person – because a little earlier, we have seen a leaf fly by and caress the wounds of a man like a nurse in a hospital.

I spent half the movie marvelling at the fact that thank god there is still one industry that takes masala cinema seriously, without reducing it to MASS cinema, which is more about fans and star worship.

I said this is a movie of echoes, right – so along with two heroes, we get a scene with two coins, we get scenes with two religions (Hindu and Muslim), we get two men and their two missions, we get a necklace that is broken into two. And we get two halves that are perfectly structured. The first half makes us sympathise with NTR Jr and the second half makes us sympathise with Ram Charan, whose character is written like a robot.

And my favourite stretch in the film is the one that shows us how he became such a robot-like man. We go back to his childhood and in a stunning scene, his father doesn't let him mourn a tragedy. He just asks the boy to concentrate on his mission. And here too there is the image of clasped hands. The boy makes a promise to his father, putting his small hand in his father's hand. Ajay Devgn plays the father and he is excellent in what could be called a cameo role. Alia Bhatt is there in a cameo too. Her role is shorter than her first name.

Rajamouli's cinema is not just masala cinema but also mythological cinema. So he shapes Komaram Bheem like the Bheema from mythology, whose strength was legendary. He can roar back at a tiger and even pick up a motorbike with his bare hands, and he is given the moment where Hanuman tells Ram that he has seen Sita. After all, Bheem was Hanuman's brother.

And Alluri Sitarama Raju is literally Ram. He uses a bow and arrows. He has a fiancee named Sita, and another girl is kidnapped like Sita was, he has been on a vanvas for four years, away from his home, and the British empire is referred to as Lanka. So in a way, RRR is the story of the British as asuras and how two devas saved India. The cinematography is by Senthil Kumar and the framing is often spectacular. Ram Charan's intro scene is a one versus many fight and it is shot so cleanly and clearly that it almost makes you believe. That is the whole point right? Make-believe?

Despite the three-hour running time, I was never bored but I wished the film had been so much more. Mainly, I wished there had been more emotional moments – not just between Ram and Sita but also Ram and Bheem. They get a fun song, a great dance sequence and some comedy with a Britisher named Jenny – but this friendship needed to be established deeper for us to feel the full weight of the second half. Right now, it just looks like a series of action scenes. Even in the first half, a betrayal would have meant more had the emotions been stronger.

But then I look back at the interval scene and the way it tickles both the child and the adult in you. Just wait till you see what emerges from a truck. My eyes practically popped out, and I was reminded of how SS Rajamouli keeps talking about Amar Chitra Katha. RRR could have been better, but it's one-of-a-kind and certainly something you want to see on a big screen.

Verdict: A one-of-a-kind epic that certainly a big-screen experience

Karan Johar's take on the current trend of pan Indian films. Check out his unmissable reply!

WOW: RRR 2 to happen? - Latest exciting word on the sequel plans! Check Out!

Alia Bhatt breaks her silence about being upset with RRR team - Check out her Official Statement!

JR NTR pens a heartfelt note after the massive success of RRR - here is what he had to say!