Keerthy Suresh is the star at Thalaivar 168 shooting spot celebrations! Check out these pics... 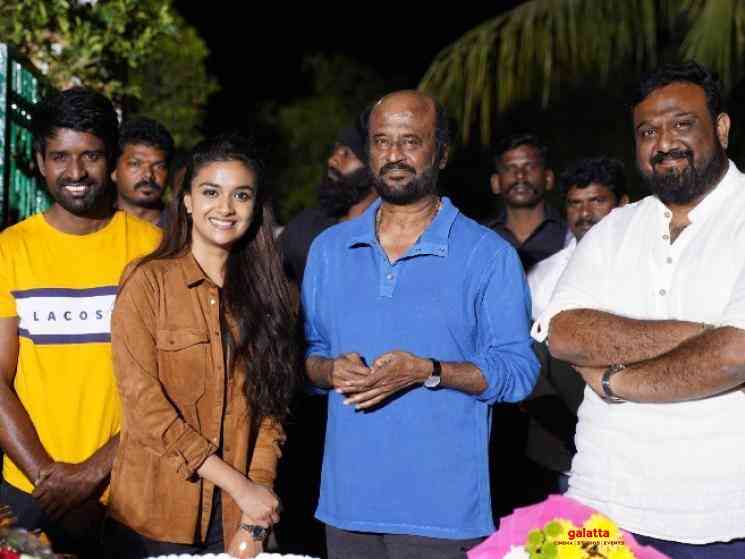 The gorgeous Keerthy Suresh proved to be an amazing performer with a memorable performance in Mahanati and this garnered her the National Award for Best Actress. The 66th National Awards were given away on Monday (December 23rd) by the Indian Vice President Mr. Venkaiah Naidu, to all the winners. Keerthy Suresh attended this event at the Vigyan Bhawan in New Delhi and received her award. Congratulatory wishes have been pouring in for her from all quarters and just yesterday Anushka Shetty put up some warm wishes for Keerthy on her Facebook page.

It recently came to light that Keerthy is playing an important role in Superstar Rajinikanth's upcoming movie Thalaivar 168. The shooting for this movie went on floors recently and the unit is currently at the Ramoji Rao Film City, in Hyderabad. The entire Thalaivar 168 team, including Superstar Rajinikanth, celebrated Keerthy's success in receiving the National Award by cutting a cake and wishing her at the shooting spot! Photos of this celebration have gone viral on the internet. A very happy Keerthy was presented with a flower bouquet by Rajinikanth and the entire Thalaivar 168 team including Soori and Siva, seemed to be sharing in her happiness.

Also, actress Meena shared some behind the scenes photos from the Thalaivar 168 shooting spot! She shared photos of herself with Keerthy Suresh, Sathish and even Khushbu. Meena and Khushbu are both playing female leads alongside Rajinikanth, in this movie. Meena shared these photos on her Instagram story. Here are the pics: