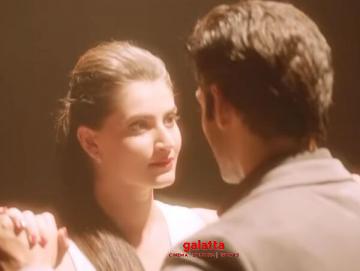 Yeh Saali Aashiqui, the Bollywood romantic thriller film is directed by Cherag Ruparel and produced by Dr Jayantilal Gada under the banner Pen India Limited and Amrish Puri Films. Yeh Saali Aashiqui stars debutants Vardhan Puri and Shivaleeka Oberoi in lead roles. Names like Ruslaan Mumtaz, Amit Arora and Jesse Lever also played important roles in the film. Screenplay and dialogues are written by Vardhan-Cherag, the cinematography is handled by Pratik Shah and the editing is made by Anirban Dutta. The music for the film is composed by Hitesh Modak with lyrics written by Tanveer Ghazi.

After an initial delay, Yeh Saali Aashiqui hit the theatres on November 29th and opened to positive reviews from the fans. With the film running at the theatres, the maker shave released the video of the song Sanki from the film. Composed by Hitesh Modak, voiced by Arun HK and penned by Tanveer Ghazi, the song showcases the twisted side of love and obsession. Check out the lyric video of the song Sanki below,