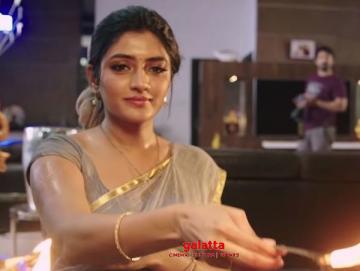 Ragala 24 Gantallo, the Telugu suspense thriller film featuring Eesha Rebba and Satyadev Kancharana in lead roles is directed Sreenivass Redde and the film is produced by Srinivas Kanuru under the banner of Sri Navhas Creations in association with Sree Karthikeya Celluloids. The film also stars Sriram, Ganesh Venkatraman, Musskan Sethi, Krishna Bhagavan, Anurag, Ayaj, Ravi Prakash and among others in important roles. Ragala 24 Gantallo Raghu Kunche has composed the music for this film. The movie has cinematography by Anji, dialogues by Krishna Bhagawan and fights choreographed by Vicky.

Ragala 24 Gantallo had a huge expectation and the film released on November 15th worldwide. The film opened to some decent reviews from fans and is off to a good start. With the film at the theatres, the team has now released the video of the song named Nee Nagumomuki Namo Namo from the movie. Raghu Kunche has composed the song with the voices of Haricharan and Ramya Shree Kamaraju. Nee Nagumomuki Namo Namo has lyrics written by Shree Mani.