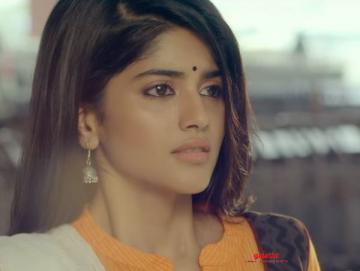 Satellite Shankar is an upcoming Bollywood action drama film featuring Sooraj Pancholi and Megha Akash in lead roles. Sooraj Pancholi who made his big-screen debut in 2015 is looking to make a comeback with this film. The cute and charming southern actress Megha Akash who played an important role in Rajinikanth's Petta and the lead in STR's VRV and Atharvaa's Boomerang is making her Bollywood debut in Satellite Shankar.

Satellite Shankar is written and directed by Irfan Kamal and is bankrolled by Super Cassettes Industries Pvt Ltd and Cine 1 Studios. Music of the film is composed by Mithoon, Rochak Kohli and Tanishk Bagchi, while lyrics are written by Mithoon and Kumaar. Satelight Shankar is the first-ever Bollywood film to be shot across the 10 states of India. The film based on the life of Indian soldiers and tells the story of the adventures of an Indian soldier played by Sooraj Pancholi. Satellite Shankar set to hit the theatres on November 15th and the makers have now released the trailer of the film. Check out the official trailer of Satellite Shankar below,