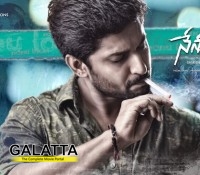 Promising actor Nani is back with another romantic comedy entertainer – Nenu Local. With a perfect local flavor ready to appeal International audience Nani’s Nenu Local has hit the theatres today. Directed by Trinadha Rao of Cinema Chupista Mama fame, the film has been produced by Dil Raju and Sireesh. Devi Sri Prasad is the music director and Nenu Shailaja fame Keerthi Suresh is playing the female lead in the film.

Babu (Nani) doesn’t have high aspirations in life and takes things as its come its way. Babu falls for Keerthi (Keerthi Suresh) and tries million ways to impress her. Keerthi finally falls for him and just when they think things are going smooth, a twist enters in their life. Keerthi’s dad (Sachin Khadekar) gets into trouble because of a police officer Siddarth Varma (Naveen Chandra). The rest of the story forms in how our local boy Baabu solves these issues and wins the hearts of everyone.

Nenu Local has a routine story with nothing new to offer in terms of storyline but the narration and screenplay keeps the audience engaged. Nani as always entertains all of us with his super comic timing, immense acting talent and natural acting.

Keerthi looks impressive in her role and their chemistry is also worth a watch. Naveen Chandra and Sachin Khadekar roles also stand apart in the film. Devisri’s music is another plus point to the film.

The director Trinadh Rao has some special feeling for father-in-law roles. Like his earlier film Cinema Choopista Mama even Nenu Local’s father-in-law and son-in-law track keeps the audience entertained.

Nenu Local is a Telugu movie. are part of the cast of Nenu Local. The movie is directed by Music is by . Production .