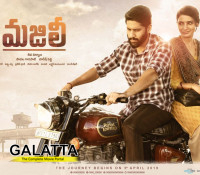 In many ways, Majili is a familiar tale, it is about a guy who gets married after a failed relationship. Since movies like Raja Rani and Mouna Ragam have talked about similar subjects in the past, Majili's storyline doesn’t offer anything fresh or exciting apart. Poorna (Naga Chaitanya), an aspiring cricketer who turns alcoholic after a love failure, he eventually gets married to another girl but is unable to forget his previous love even after several years of separation. How he decides to let go of the past and embrace the future is what the plot is all about. Poorna is considered as one of the best batsmen in the city but his Strokeplay doesn’t give you that feeling. Actors cannot become professional cricketers overnight but at least some level of authenticity needs to be there when you say he is the best cricketer. Even the way, the cricketing portions were shot were below par and quite disappointing.  Majili has two love stories, the first one featuring Chay and Divyansha which looked like a juvenile play. They fall in love for no reason and immediately find themselves so attached to one another. Majili also has an antagonist in the form of Subbaraju, he comes and goes occasionally whenever the team wanted to infuse a fight scene in an attempt to pep up the screenplay. Samantha comes only during the interval and the audience breaks into a thunderous rapture when she appears on screen for the first time. The coming back of real-life pair Chay and Samantha has given a facelift to the film. It is needless to say they look great together. Their chemistry in the film is also well captured. The love portion between Chay and Samantha was handled way better than the first love track. Samantha keeps getting better with every film, she has upped her game once again in Majili. The story gets life only after her introduction. Though the screenplay travels in a predictable terrain, at least it was watchable after Samantha’s entry. One of the montage songs will have a beautiful interlink to a lot of scenes in the first half which happens to be one of the highpoints in the film. A couple of Gopi Sundar's songs have already scorched the charts, and the music overall is a strong pillar for Majili. The background score is scored by SS Thaman, though the re-recording sounds so apt, some of the tunes remind of Mouna Ragam and Alaipayuthey's. Even the music used during the pre-interval fight sounded so familiar.

Verdict :Majili is quite predictable and boring. Just good music and a stellar performance from Samantha are not enough to save us from boredom.

Majili is a Telugu movie. are part of the cast of Majili. The movie is directed by Shiva Nirvana Music is by Gopi Sunder . Production Shine Screens.