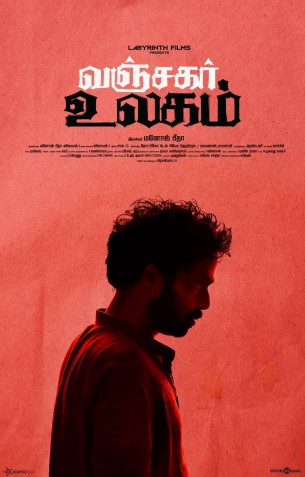 Starts-off as a murder mystery with Police officers and press reporters investigating the crime. How Guru Somasundaram steps in and what happens after that forms the remaining story of the movie Vanjagar Ulagam.

Guru Somasundaram’s performance is stunning, his screen presence with respect to his characterization was scintillating to experience. Chandini Tamilarasan has to be lauded for taking up a gutsy role and playing it convincingly in Vanjagar Ulagam. Azhagam Perumal is top-notch with his natural acting. Vanjagar Ulagam film revolves around a lot of youngsters in supporting roles, there was a slightly odd feeling with their performances as something seems to be disturbing in their reactions and dialogue deliveries.

Debut director Manoj Beedha has made an experimental attempt here, both with the content and way of approach. Somehow with his decent writing, he has made a fairly engaging gangster drama Vanjagar Ulagam. He has presented things on a fresh basis till halfway which makes the flow a fine one. Dialogues are different, but being adults only flick, few complicated stuff could have been explained with even more depth. Post interval, the movie holds only at parts as the drama is stretched, especially at the end when the true colours are revealed.

Songs of Sam.C.S is impressive, he has provided a different flavour to this move. His background music is very good, the unique composition in the interval sequence was truly exceptional. Vanjagar Ulagam movie is technically sound too, camera and edit team have provided an equal share of quality work that enriches the experience. There are innovative ideas and moments which tend to be attractive with topical sounding and artwork.

Chandini Tamilarasan’s actual character was confusing in the initial stages, it became too late by the time her real conflict came to light. The twists were predictable well ahead in time they were revealed in the flow. There are lip-sync issues with respect to few newcomers in Vanjagar Ulagam. The double interrogation sequence right after the interval misses out connectivity. The content is targeted only for a certain section of the audience and it might tickle a few.

Verdict :A well written relevant new-age attempt which falls short to engage in its second half.

Vanjagar Ulagam is a Tamil movie. Chandini Tamilarasan,Guru Somasundaram are part of the cast of Vanjagar Ulagam. The movie is directed by Manoj Beedha Music is by Sam C S . Production Labyrinth Films.