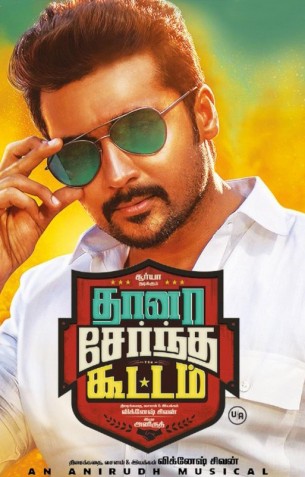 Thaanaa Serndha Koottam is a breather that Suriya has taken after a series of serious films but don't get the hint wrong, this is also an intense film. Thaanaa Serndha Koottam will show the comic side of Suriya that we have seen in movies like Aadhavan and Sillunu Oru Kaadhal. We see a colourful Suriya who has taken the role offered to him in every ounce of possibility to establish his acting nuances. The nakkal naiyandi kind of dialogue delivery has always worked for him like in Pithamagan. For Suriya fans, you are going to love this for this side of Suriya that we have always enjoyed from him.

Ramya Krishnan has given us a terrific performance after we saw her as Rajamatha Sivagami in the Baahubali series. The various shades of emotions that she has portrayed in Thaanaa Serndha Koottam proves yet another time that she can do any role with ease. Be it her looks or dialogue delivery or the intensity she emotes through her eyes, maybe we can say she is the second hero of Thaanaa Serndha Koottam.

Keerthy Suresh plays a cute brahmin girl who is a theif herself and her portions with Suriya have worked out very well. She has fit in perfectly to the role offered to her and is a fresh breeze in the screenplay. The casting is perfect for the script and every actor has pillared the script to the best of their ability. Right from Karthik, each actor have showed their best and we have Senthil, Thambi Ramaiah, Kalaiyarasan, Sathyan, Suresh Chandra Menon, Yogi Babu and RJ Balaji

The album already became a hit even before the release of the movie and Anirudh has extended the magic in the background score too. Dinesh Krishnan's cinematography and Sreekar Prasad's editing come out crisp and clear making the experience of Thaanaa Serndha Koottam a pleasant one. The one liners that are spilled all over the movie have added more weightage to the script and Vignesh ShivN should be appreciated for bringing out a clean entertainer.

This is a movie that will make you question the system that exists in the society and how it affects the real talents. This is something that we have seen earlier in some other big movies too but the presentation is different and the system still needs to be amened to begin crediting people on merit. The plus point is that the script is not preachy and the message has been interluded in a mass entertainment movie.

Some predictable moments but looking at the overall movie, this is not a big concern

Verdict - A clean entertainment package intertwined with fun, emotions and a strong message

Verdict :A clean entertainment package intertwined with fun, emotions and a strong message