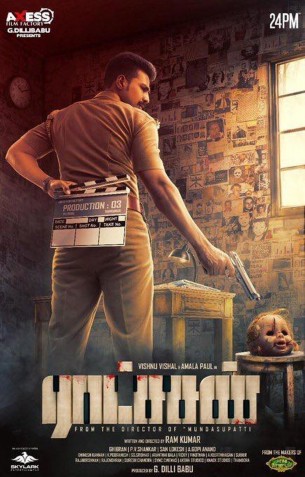 Ratsasan is a Tamil psychological thriller film directed by Ramkumar. The movie features Vishnu and Amala Paul in the lead roles and music is composed by Ghibran.

A series of murders occur at Chennai city. Vishnu Vishal is a Police officer and he suspects that it would be a psycho killer case. How he unfolds the mystery forms the crux of the story.

Proper research has been made by the team about psycho killers which gives a different perception about their lifestyle. The detailing about the crimes are solid as the writing has enough depth and the script by nature has a vast scope for it. The mystery route is interesting but in parallel, certain situations that take place to few characters give us an open hint about the destination. The reason for all the murders was a little easy to guess as there is a correlation between the crimes. The climax fight could have been realistic. There are some logic loopholes that takes the believability factor far from us.

Director Ram Kumar ‘s way of approach is good due to the addition of some smartly written thrilling moments. The screenplay is quite engaging, but there are places where the progression goes for a pause too. With lesser characters and lesser loopholes in the progression, the outcome would have been unpredictable. Dialogues are powerful and the treatment packs a punch too. The base content is an extremely rare phenomenon, hence, it was hard to connect with the emotions behind the revenge. The terrifying-doll factor that pops-out after very murder heats up the intensity. The sub-plots are flat and appear as lags without creating any impact on the flow.

Vishnu Vishal has carried the content well on his shoulders as his presence is gutsy. Amala Paul has played her part nicely, but her character has no depth. There are some cliche moments between the hero and the heroine at initial stages as well. Characterization of Ramdoss is neat. The artist who played the rude-teacher role did a very good job and his portions were nerve-wracking.

Even after revealing the villain, the movie drags to an extent towards the end. Ghibran’s songs were just mediocre and did not gel much with the genre as well. But his background score is top-notch here and haunting in many situations. Camera work is also first class and gives an authentic feel of the locations that take place. Cross-cuts elevate the tension in the story, but the overall duration could have been reduced.

Verdict :In spite of flaws, 'Ratsasan' is a very decent mystery thriller

Raatchasan is a Tamil movie. Vishnu,Amala Paul are part of the cast of Raatchasan. The movie is directed by Ram Kumar Music is by Ghibran . Production Axess Film Factory.