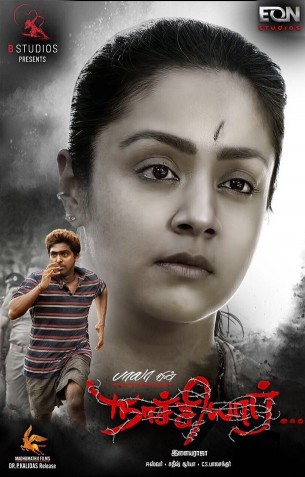 Naachiyaar is an action drama film jointly produced under the B Studios and EON Studios banners has been written and directed by Bala with Jyothika in the titular role along with G. V. Prakash Kumar and Ivana in vital supporting roles and, a musical score by 'Isaignani' Ilaiyaraaja.

As with any Bala film, the expectations tend to be quite high. His Naachiyaar in comparison to his previous films is serious in its tone and is the shortest film in his career clocking in at exactly 100 minutes in runtime.

Bala's fans, who will have gone in to watch a film that has a detailed story as his other films will be in for a surprise in the manner the story wraps up in such quick time. As for the story, it is simple and not as complex to the likes of Pithamagan, Naan Kadavul or Paradesi.

Naachiyaar starts off showing us Jyothika as a headstrong, tough and honest cop, who is generally unfazed by the obstacles that come toward her. We are then introduced to GV Prakash Kumar, a young boy who does small errands for a living and this is where he meets Ivana.

The two fall in love and their lives are happy until an incident that rocks their lives altogether and GV Prakash ends up in jail. The case comes to Jyothika’s notice, who feels convinced there is more to than meets the eye. How Jyothika debunks each hurdle and proves GV Prakash to be innocent is pretty much what the plot of Naachiyaar is centered around.

For those who will be walking in to watch Naachiyaar after Bala’s previous film, Thaarai Thappattai, will feel better on some level considering he has indeed improved from his mistake and tried to make a film that isn’t too violent or forceful of a topic. Some will feel a bit surprised by the non-inclusion of songs in the narrative except for one and it remains to be seen how general audiences will react to Bala’s strategy this time. In short, the film will not seem like a film, but more on the lines of a telefilm.

Jyothika is a class act despite a shaky beginning, but that is mainly since we have never seen her in roles that demand her to be such a tough character. GV Prakash’s role in Naachiyaar might seem familiar to some of the iterations portrayed by other heroes in Bala’s films, but he certainly has improved. Ivana, the new find, who comes as GV Prakash’s pair comes up with a decent performance and shows promise to be a good performer.

On the technical front, cinematographer Eshwar could have done a better job. Sathish Suriya’s cuts on the editing table are for the most part not out of place and compliment decently to the progression of the story. Although 'Isaignani' Ilaiyaraaja had to deliver only one song in the film, he certainly could have made it up in the background score department, where he usually tends to score high marks.

Verdict :A telefilm that attempts to pass off as a film

Naachiyaar is a Tamil movie. Jyothika,G. V. Prakash Kumar are part of the cast of Naachiyaar. The movie is directed by Bala Music is by Ilaiyaraaja . Production EON Studios,B Studios.