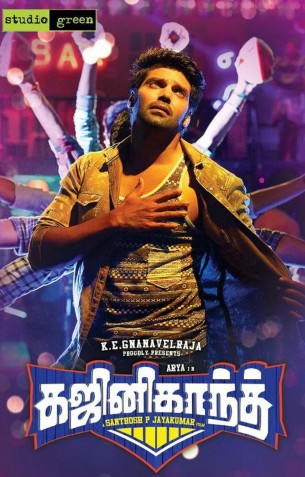 Ghajinikanth stars Arya and Sayyeshaa Saigal in the lead roles. Arya has mind-diversion problem since his childhood, he forget things when his mind goes after another. Sayyeshaa falls in love with him without knowing this problem of his, what happens after this situation reaches her family forms the remaining story.

Director Santhosh.P Jayakumar has remade every scene of the original Telugu version without any change, the plot and scenes do suit well for Tamil too. The situations regarding Arya’s memory problem are strong, but the dialogues disturb them from delivering complete laughter. His direction is neat and the script is convincing enough to provide a decent entertainer.

But the screenplay is flat without any surprises, the flow is highly predictable and offers only very few excitement factors during the watch. With a better screen presence, dialogue delivery and reactions from the lead hero Arya, the movie could have gone several notches higher than it is. However, he fits in to his role finely.

Sayyeshaa plays an important role and her screen space is noteworthy, but her character has been sketched in the regular commercial masala manner and in childish way too. Supporting characters like Sathish, Sampath and Aadukalam Naren are really impressive, they all have done their part well. Sathish is decent with his one line counters, while Aadukalam Naren creates laughter with his funny face reactions.

Karunakaran and Motta Rajendran could have given more space to evolve in the story as their characters fall flat without creating any impact to the progression. Villain’s characterization could have had a stronger writing. Towards the end, the film drags to huge extent, with finer fight sequences and performance from the antagonist would have made this a decent flick.

Balamurali Balu’s songs could have been much more in sync with the taste of audience. His background music also gave a mixed feeling. Ballu’s camera work easily sets the mood bright with his colourful presentation. Prasanna GK’s cuts are pretty decent but he could have work with the director to reduce the runtime as 145mins felt too long for this film.

Logic missed out at many portions and it was hard to keep a count. Considering the issue in hero’s life, director could have approached the screenplay in a realistic manner so that we would have got a different touch. Climax action sequence was peak on heroism and the rope shots could have been easily avoided.

Verdict :Situations are quirky, but with better performances and comedies, Ghajinikanth would have become a satisfying watch

GhajiniKanth is a Tamil movie. Sayyeshaa,Arya are part of the cast of GhajiniKanth . The movie is directed by Santhosh P. Jayakumar Music is by Balamurali Balu . Production Studio Green.