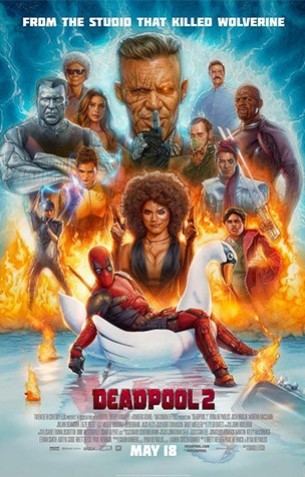 Deadpool 2 is a superhero film based on the Marvel Comics character Deadpool, distributed by 20th Century Fox and is the eleventh installment in the X-Men film series. A sequel to the 2016 film Deadpool, the film is directed by David Leitch from a script by Rhett Reese, Paul Wernick, and Ryan Reynolds, with Reynolds starring in the title role alongside Josh Brolin, Morena Baccarin, Julian Dennison, Zazie Beetz, T.J. Miller and Brianna Hildebrand among others.

Let’s face it, a majority of the sequels outright suck. There’s always a certain level of risk involved when a sequel is being made:

And, this is where the most obvious options come about – to make a sequel that’s either as close to the original or something new and bold by trying to include the best elements of the original.

It’s an impossible task and requires a lot of effort from filmmakers to perfect their attempts time after time. So, the question now arises – where does Deadpool 2 stand? Well, it’s a sequel.

When the first Deadpool came out in 2016, it had a carefree attitude surrounding it and audiences were treated to an absolute ripper of a fun film. The levels of adrenaline we got to feel with the original film still remain fresh and is enough testimony to its success. Be it Ryan Reynolds’ dedicated and charismatic performance or a simple and direct plot, the film hit the jackpot among audiences.

On the other hand, Deadpool 2 too sets out to deliver the same quality of fun and adrenaline as in the original with Ryan Reynolds once again leading the way but, with more murder this time.

We see Wade Wilson aka. Deadpool taking out criminals and the premise of the plot primarily revolves around one failed mission with the target eventually setting out to find the 'Merc with a Mouth' and get his revenge.

In the process, Deadpool forms a new team called the X-Force with the film then going on to showcase high-octane stunt sequences with plenty of humor loaded throughout.

Perhaps the biggest problem Deadpool 2 faces is the success of its predecessor, Deadpool, and the demand to catch up to its triumph. In short, if Deadpool included highs and lows, the makers decided the best route to ensure a victory once again would be to incorporate the same highs and also the lows. However, the lows are way more noticeable than what we got to witness in the original.

The problem Deadpool 2 faces isn’t new in the realms of sequels as all second films in franchises have gone through similar issues with their highs and lows. Despite all this, the film is quite entertaining with no shortcomings in character development and his knack for humor at the wrong places at the wrong times.

A majority of filmgoers will feel satisfied with what’s been put out in front of them and that being the film is an enjoyable outing at the movies. However, if the direction of the franchise can still take a radical turn for good, that would primarily rely on those behind the next film, if there is going to be one.

Repetition of tropes from the original film

Verdict :More ambitious than the original; yet repeats the positives AND negatives too

Deadpool 2 is a Tamil movie. Zazie Beetz,T.J. Miller,Brianna Hildebrand,Morena Baccarin,Josh Brolin,Ryan Reynolds are part of the cast of Deadpool 2. The movie is directed by Music is by Tyler Bates . Production Kinberg Genre,Marvel Entertainment.