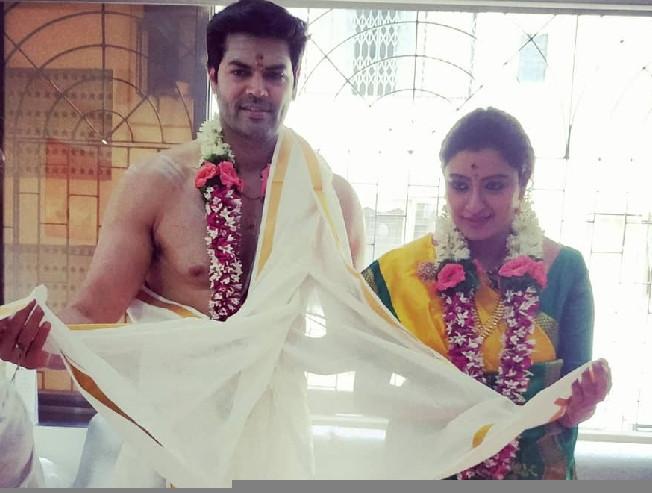 Abhiyum Naanum and Unnai Pol Oruvan fame Ganesh Venkataraman is now a known figure especially among the household audience, after his appearance in the first season of Bigg Boss. He got married to popular serial and film actress, Nisha Krishnan in 2015 and it was a love marriage. The couple holds great amount of love among the audience and their pictures have always set the couple goals.

While Ganesh was seen focussing on his film acting projects, Nisha was busy with her serial commitments on the television. The couple have once again made it to the headlines and it is indeed a happy news. Nisha Krishnan is pregnant and the duo are expecting their first child very soon. Yes, the baby shower event for Nisha happened this morning at her residence. Ganesh took to his social media space to share this good news with his followers.

He is excited to welcome his first baby and enjoy his fatherhood. He posted a picture of him and Nisha and said, "Welcoming the soon to come 'New Arrival' in the family & seeking blessings for my love @prettysunshine28 with a traditional Seemandham... Excited about this New Phase of life 'Fatherhood' Time to grow up myself #WeAreExpecting #ComingSoon #PositiveVibes #Family #Fatherhood".

Actors like Prasanna, Gayathri Raghuram, and few others wished the couple on the beginning of their new phase as parents. At this juncture, Galatta also sends its best wishes to the couple!

Excited abt this New Phase of life 'Fatherhood' 👼
Time to grow up myself 😜😜#WeAreExpecting#ComingSoon#PositiveVibes#Family#Fatherhood pic.twitter.com/HRxInhckVc