"My b***s, I can't cut it off bro", popular actress' befitting reply to her troller

It is not a rarity to see women actors being abused on social media for their dressing style and glamorous pictures. We have seen leading actors like Samantha Akkineni, Trisha, Priya Bhavanishankar, Malavika Mohanan, and many others giving befitting replies to the criticisms made by anonymous people. The latest to join this list is actress Drishya Raghunath.

The young and talented actress is a known figure in the Malayalam film industry who has worked in films like Happy Wedding and Match Box. One of her recent pictures on Instagram received backlash from a certain section of people, for whom, the picture looked to be sleazy and exposing. She was seen flaunting a swimsuit in this photo shoot. One of her followers on Instagram commented on that picture and asked Drishya on why she is defaming her own self with pictures of this style.

Drishya took the social media users by surprise when she instantly hit back at him with her reply. She stated that she has covered the parts which has to be and she doesn't find anything to be offensive in that picture. Drishya posted, "Broo... Am I wearing a bikini and lying? No right? I have covered the things that have to be. Openly speaking, that thing (my boobs) I can't cut it off bro. That's natural. And I never showed it off.

I have covered it in a possible way and I will keep on covering it too. So please understand people " After this bold and gutsy comment, Drishya received lot of support from her followers for openly speaking up. Drishya, in turn, thanked everyone for lending the support. 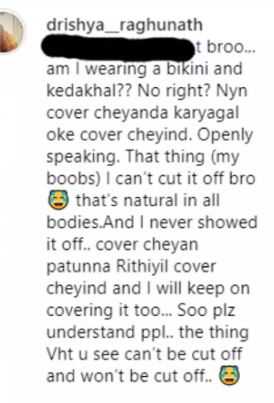