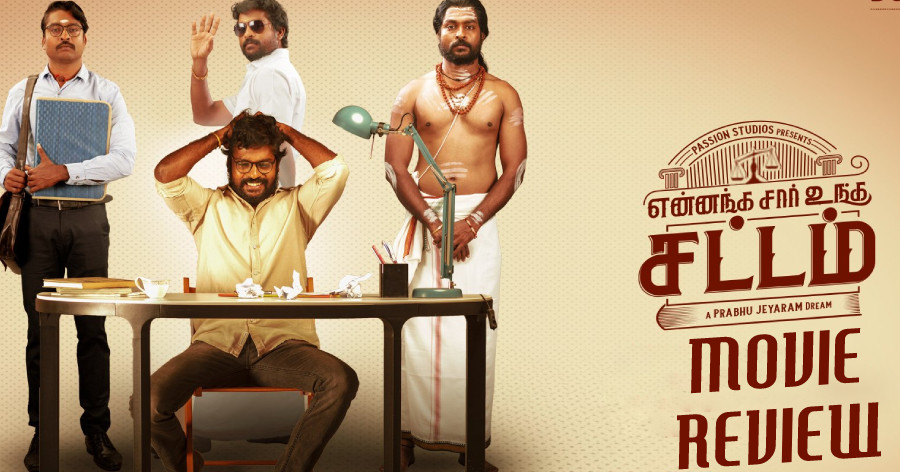 Yennanga Sir Unga Sattam, starring the young and promising Karthiik RS in the lead role, has released on the Sony Liv platform. The film is directed by debutant Prabhu Jeyaram and produced by Passion Studios.

STORY:
Yennanga Sir Unga Sattam is a duplex film that has two different stories. Both the stories have caste as the underlying point - the first half is treated on a light-hearted note with fun, while the latter half has an intense and serious approach. Yennanga Sir Unga Sattam talks about a very serious topic - about the reservation quota and how it needs to benefit the economically backward people. The film also addresses another point - any person (irrespective of the caste) can become a priest in a temple and it is not just catered to the Brahmins. How has director Prabhu Jeyaram treated this sensitive subject? Watch the film to know!

SCREENPLAY, DIALOGUES & DIRECTION:
Director Prabhu Jeyaram garners good attention with his intention and writing. For a debut filmmaker, Yennanga Sir Unga Sattam is indeed a bold attempt as the film is surely going to raise a lot of debates,  and arguments on social media. The intention to address these topics is noteworthy and the characters have been sketched in an interesting fashion. The writing is precise and to the point and director Prabhu has made the film without any compromises. The first half of the film passes the time with some interesting comedies and uninteresting romance, but the second half would make you sit through because of the topics that it addresses. The dialogues are straightforward and have also been written in an impactful manner.

On the flip side, the staging of scenes is a concern that needs to be noted. The execution part is quite ordinary and generic and in a film that talks about a highly sensitive and important topic, the execution should have been effective. Only then, the final impact of the film would be solid. Due to an average execution, the impact of the scenes is middling. The first half of the film is majorly flat and doesn't have any interesting sequences to hold the audience's attention.

There is no proper detailing on how the characters fell in love with each other and it just happens after a series of stalking. It would have been nice if Prabhu Jeyaram had centred the entire film around what he addresses in the second half, as the first half doesn't help much. If one could accept what director Prabhu Jeyaram talks about reservation quota, the film could turn out to be a good watch, but if you are against it and feel that there is so much more to the reservation quota, the reaction could be different.

CAST:
RS Karthiik as the protagonist is impressive and his natural performance is likeable. Karthiik has delivered a fairly neat performance. Rohini also garners good attention with her sensible performance as Bhadrakali in the second half. Madras Meter Gopal helps in a few laughs here and there and his performance is a delight. There are four female leads and all four of them get their screen space in the first half - though there are not any major complaints on their performances, it would have been nice if they had a proper start and end.

TECHNICAL:
Guna Balasubramanian's background music adds fine support to Yennanga Sir Unga Sattam, helping in elevating the impact of certain scenes. Among the songs, 'Jeeraga Biriyani' turns to be an impressive listen. Arunkrishna Radhakrishnan's cinematography is neat and apt, while Prakash Karunanithi's edit could have been crispier.

SO?
With an impactful second half, Yennanga Sir Unga Sattam passes the test.