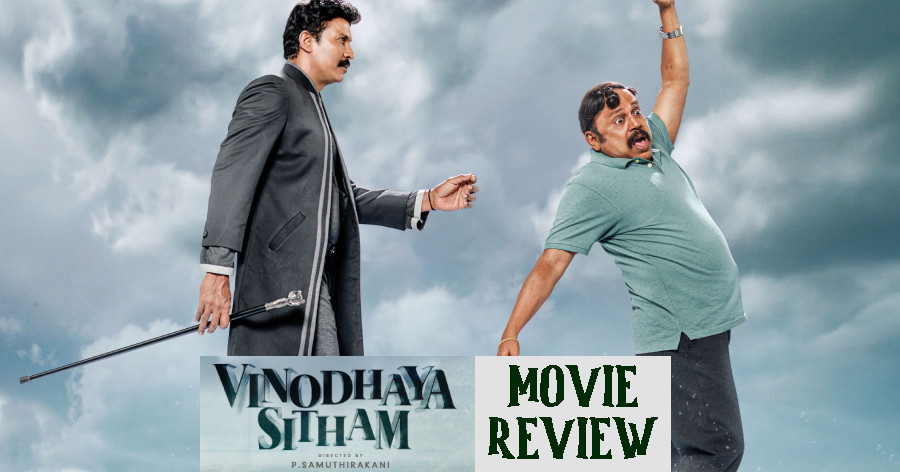 Samuthirakani, who is known for his message-driven emotional dramas, is back with his latest film, Vinodhaya Sitham, which has been released on the ZEE5 platform. Vinodhaya Sitham is a project that has been designed as an OTT film right from the beginning and it stars Thambi Ramaiah and Samuthirakani in the lead roles. How has the film fared? Read on to know!

STORY:
What happens when time takes the form of a human being and dictates the fate of a man? Quite interesting, right? Yes! In Vinodhaya Sitham, we have Samuthirakani playing the role of Time that travels along with Parasuram (Thambi Ramaiah), who is a well-disciplined man in his 50s. Parasuram is someone who expects his family members to abide by his interests and guidance. Time gives Parasuram a deadline to fulfil his responsibilities as a father and husband as it is already time for him to leave earth. However, when Parasuram decides to fulfil his desires, his family thinks otherwise and Time becomes his companion. What did Time teach Parasuram in the last few days of his life forms the rest of the plot.

SCREENPLAY, DIALOGUES & DIRECTION:
Samuthirakani's films are usually loaded with messages, but Vinodhaya Sitham is comparatively less in that aspect and it turns out to be a decent watch. The messages are organic and it goes with the flow of the movie. The writing is precise and neat, due credits to the writer of the film - Sreevathson. The film does not deviate from its plot anywhere and since this is an OTT film, it sticks to the content without any commercial compromises. Samuthirakani and co. intend to tell that everything in this world has been predestined and there would be no change, irrespective of our presence and the team has succeeded to a fair extent in conveying the same. The dialogues penned by Viji, Sreevathson, and Samuthirakani are effective, supplementing the core premise of the film.

On the flip side, the staging of the sequences is a concern as the quality of the product looks like a television serial/drama. The staging is artificial at places and the visuals also add more fuel to it. The drama between the characters are interestingly constructed, but at the same time, it touches all the conflicts only on a surface level and so the conflict doesn’t seem intense. The screenplay turns predictable after a certain point of time and until the end, that seems to be the case.

CAST:
Thambi Ramaiah in a well-anchored role does his part neatly well. Of course, certain actions look dramatic and over the top, but it does not hinder the film on a complainable level. Samuthirakani, as Time, carries his role with his simple and an admirable earnest performance. Sriranjani, Jayaprakash, Sanchita Shetty, Hari Krishnan, Munishkanth, and other actors do what is expected of them. Certain performances could have been extracted better as there is a tinge of artificiality among a few actors.

SO?
With more solid drama in the screenplay and more finesse in the technical department, Vinodhaya Sitham would have been a compelling watch!

Verdict Vinodhaya Sitham is a good watch that holds our attention with its interesting premise!