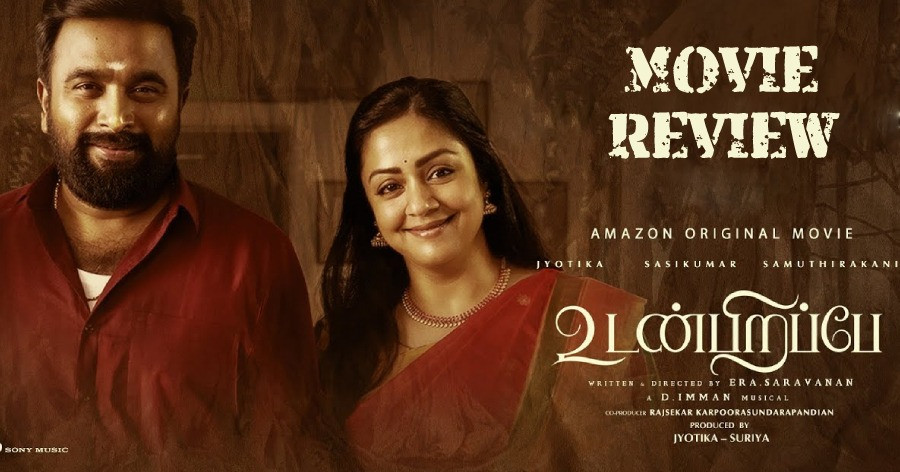 Jyotika's 50th film, Udanpirappe, has released on Amazon Prime Video as a direct OTT release. The film is directed by Era Saravanan of Kathukutty fame and has Sasikumar and Samuthirakani playing the other leads. Produced by Jyotika and Suriya under the banner of 2D Entertainment, the film has music by D Imman.

STORY:
Vairavan (Sasikumar) and Mathangi (Jyotika) are siblings who once shared an immensely emotional bond, but now not in talking terms due to Mathangi's husband, Sargunam (Samuthirakani).  Sargunam doesn't like Vairavan indulging in fights and arguments for the problems that occur in the village as he feels that all problems should be dealt with legally only in the court. Sargunam even requests Vairavan to change his rough character several times. However, there is no change and one fine day, Vairavan's actions tragically affect the family of Sargunam and Mathangi after which they stop talking to him. Several years later, a situation arises where Sargunam and Mathangi can let go off the past and join with Vairavan. But, were Sargunam and Mathangi able to come out of the tragic past and join hands again with Vairavan and family is what Udanpirappe is all about.

SCREENPLAY, DIALOGUES, & DIRECTION:
Udanpirappe definitely had the scope to explore in detail on relationships, but director Era Saravanan has touched the subject only on a surface level. He also takes the melodramatic route to convey the emotion and the treatment definitely could have been fresh and better.  The conflicts between Sargunam and Vairavan could have been made exciting with solid writing, but instead what we get is a series of cliched scenes. Udanpirappe looks outdated and melodramatic in most of the aspects and that makes us never connect with the characters. The characters cry a lot and undergo a lot of emotions, but we never feel like empathizing with them.

Several actions of Jyotika and Sasikumar (in the film) look exaggerated and over-dramatized and the makers could've taken a realistic yet simple approach and that would've made Udanpirappe more interesting and heartwarming. Director Saravanan also attempts to leave several social messages on the go, but those messages look out of place. The screenplay doesn't really touch a high to keep you engrossed and as a result, the emotional connect goes missing. Had the treatment and packaging been effective, Udanpirappe would have been a solid family entertainer on the lines of Kadai Kutty Singam or Namma Veettu Pillai. However, certain emotional moments work quite well and those moments have the potential to connect with the family audiences.

CAST:
Jyotika delivers a fine performance in her 50th film and there is a good amount of scope for her to showcase her varied emotions. Sasikumar scores well in the action blocks and talkie portions, but his performance in the emotional sequences could have been more effective. Samuthirakani does his part neatly and there are no major concerns about his portrayal as Sargunam. Soori helps with a few laughs here and there. Kalaiyarasan has been wasted in a role that is completely flat and age-old. A potential actor like him could utilise more stronger characters than opting for these aimless roles. The other supporting cast are quite okay and do justice to their respective characters.

TECHNICAL:
D Imman's massy theme music for Sasikumar's character stands out, in an otherwise functional score and songs. Velraj's camera work is okay, while Ruben's cuts could have been more complete.

SO?
Udanpirappe is melodramatic and old-fashioned, but if you can ignore those aspects, the film could be a decent watch.

Verdict Udanpirappe is an outdated family drama that doesn't touch you anywhere!