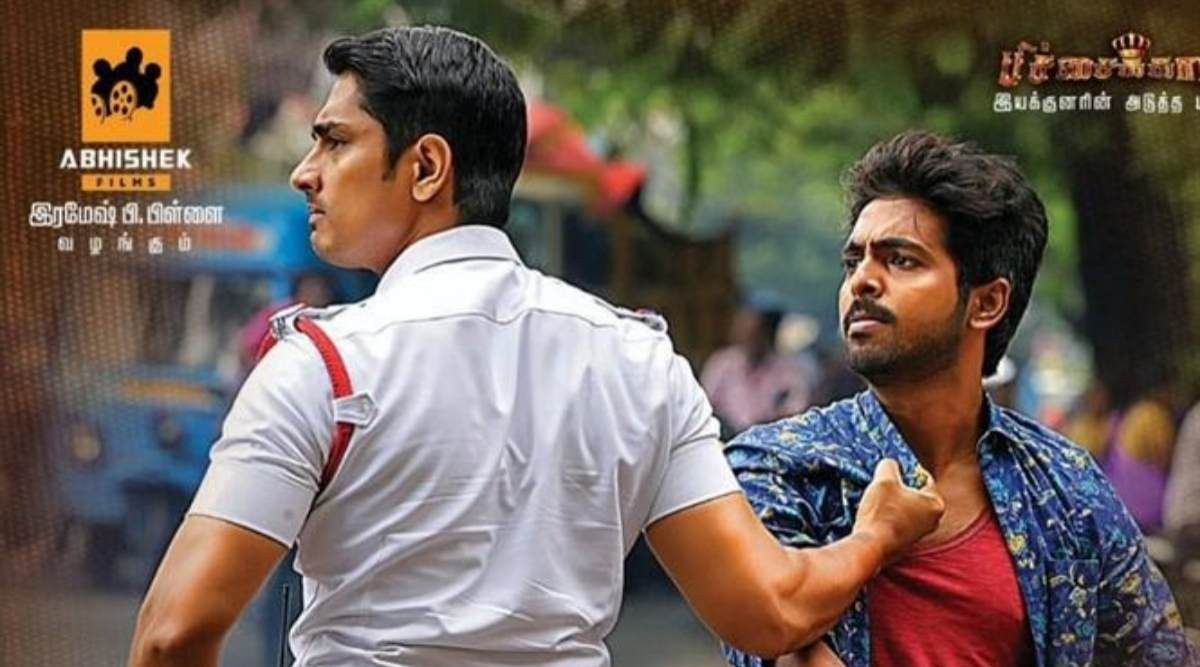 Siddharth and GV Prakash Kumar starrer Sivappu Manjal Pachai was one film that got people interested because of the freshness in the star cast and ofcourse, its director, Sasi. The acclaimed director is back after the super hit box office success of his previous film, Pichaikkaran. With a promising trailer, the film has now hit the screens for the audience's reception. How has the film fared? Check out.

Madhan (GV Prakash Kumar) is an illegal bike racer who gets caught by Rajasekar (Siddharth) a traffic police during a race. Rajasekar humiliates Madhan to make him realize his mistake, but that, unfortunately turns into a vengeance game. To spice things up, Rajasekar ends up to be Madhan's brother in law. Madhan doesn't like Rajasekar and he also develops hatred towards her sister Raji (Lijomol Jose) just because she liked Rajasekar and married him against his will. The cat and mouse game thereafter between Madhan and Rajasekar forms the rest of the story. Did Madhan change his opinion on his sister and machan is answered through the film.

Siddharth as a traffic police looks believable and fits into the character. He is naturally good and puts out a classy act. The style and body language that Siddharth carries through the film is notable and he has done complete justice to his character. GV Prakash is impressive as Madhan, the young brat who is emotional and sensitive. He gets a role that has lot of scope to perform and the young actor has pulled it off to a larger level. Unlike his other usual commercial films, the performance of GVP in Sivappu Manjal Pachai is noticably good and kudos to director Sasi for bringing that out. Lijomol Jose as the sister and wife is a valuable find and she possesses good talent. She scores well with her natural performance in the emotional and light hearted scenes. Kashmira Pardeshi, who plays GV Prakash's pair gets to play a regular templated commercial heroine.

Sivappu Manjal Pachai is an emotional action drama that has a mix of all the commercial elements. Having said that, there are a lot of moments that help in taking the film forward. The cat and mouse game between Siddharth and GV Prakash is interestingly done and it is enjoyable. The Drunk n Drive scene, the nighty scene in the second half, and the kutty dosa scene makes the game interesting. It is good to see a woman character that happens to anchor the film and direct the protagonists. The emotional relationship between the siblings is sure to connect well with the masses and the family audience. Siddharth and GV also carry a great chemistry and they hold the film on their shoulders. Their hate-love relationship is neatly brought out on screen. Equal share of applause to Lijomol as well.

The dialogues also needs a special mention and it acts as a right bridge to convey the emotions and establish the characters. The one where Siddharth shares the love for his job and another one where his mother explains about women dresses are some of the scenes that make so much sense, thanks to the neat writing and execution.

On the flipside, the film suffers from a few commercial barriers and it dilutes the overall experience of the film. The makers could have easily chopped off the antagonist angle that doesn't majorly help with the core premise. It looks to be a commercial addition and doesn't naturally blend with this story. Had the whole film been about the two protagonists and their relationship, that drama would have been even more better, since that was the best part.

The film is also melodramatic in a few scenes in the second half. Director Sasi does get overboard in the brother - sister sentiment scenes and it dilutes the emotions. The last bike racing sequence where Siddharth and GV Prakash shift driver's seat is also a commercial worry. The long climax fight sequence also doesn't help much. On the technical side, the VFX work lacks perfection at many places. Leaving out the cinematic dramatisation and the commercial compromise, Sivappu Manjal Pachai is a neat commercial entertainer that has the potential to connect with the audience.

Prasanna Kumar's cinematography and colour tones helps in conveying the film's mood. Special credits to the cinematography team for capturing the bike racing sequences with conviction. Siddhu Kumar seems to be a promising talent who scores well with the emotional scenes. The music in the action scenes could have been better. Sasi's intentions are good and he gets most of the things right except for getting marred by unnecessary commercial additions.

Verdict An emotional action drama that is majorly enjoyable except for the unnecessary commercial compromises.

New Video Song From SMP Is Out! Check Here!

New Video Song From Sivappu Manjal Pachai Is Out!