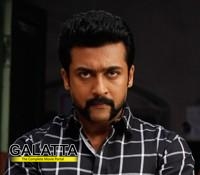 So, once again the ferocious Duraisingam is back in the khaki town. In this episode of the Hari directorial, Singam goes on a mission to Vizag to investigate the murder of the commissioner. The mission takes him to Sydney and an intriguing medical crime plot. The film is K.E.Gnanavel Raja and Dhaval Jayantilal Gada jointly producing the film under the banners, StudioGreen, Pen Movies and Aadnah Arts. The film also features Radha Ravi, Nassar, Sumithra, Janaki Sabesh, Yuvarani, Raadhika Sarathkumar, Krish and Soori in supporting roles. The technical side comprises of Harris Jayaraj, Priyan, and VJ Vijayan.

Suriya is back as the ferocious Duraisingam--louder, bolder and more energetic--and he does it with ease.

Unlike the earlier installment, director Hari has added an interesting twist to the plot by taking the mission to Sydney. And, the medical waste angle to the story is worth watching.

The fights and action sequence are impressive and of course, Suriya mouths a couple of one liner punches, at times even in English.

Anushka appears on and off in the story, though she doesn't have much of a role, she has done her part well. Indeed, the team has left a knot at the end of another Singam task in the series.

Harris Jayaraj's songs heavily remind us of his earlier works. The song could have been fresh and better.

At one point, Shruti Haasan's role seems a bit unwanted.

VERDICT: The Roaring Duraisingam is Back!

Verdict: VERDICT: The Roaring Duraisingam is Back!

Suriya's Si 3 gets a good start