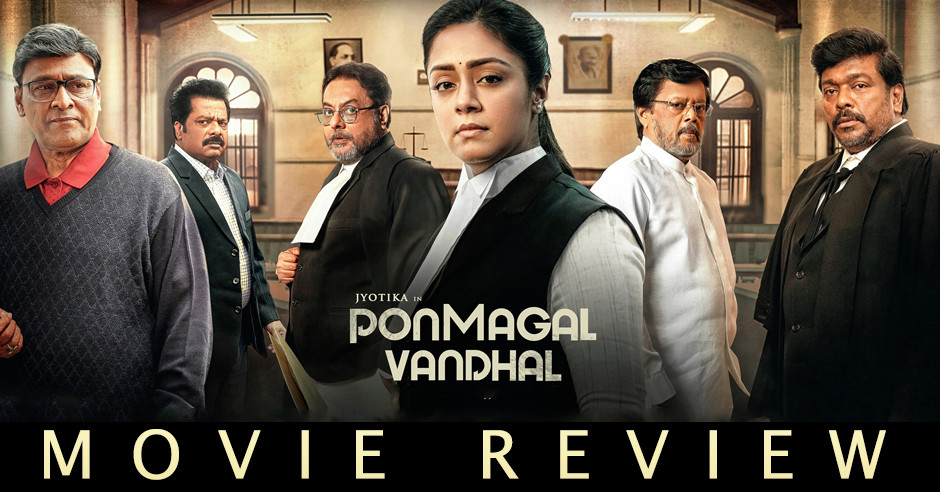 A powerful and thought-provoking story that follows a young lawyer Venba and her battle for justice. Ponmagal Vandhal is all about how a lawyer tries to defend a wrongly convicted serial killer ‘psycho’ Jyothi who was killed in a Police encounter for kidnapping and murdering five children and two youngsters. A court proceeding generally involves less talk and more paperwork but what happens in films is just the opposite, Ponmagal Vandhal is no exception to this trend. In the best tradition of mystery courtroom dramas of this sort, Ponmagal Vandhal satisfies enough on an emotional level that we are willing to forgive any intellectual, procedural, and logical shortcomings.

Bhagyaraj, Parthiban, Prathap Pothen, Pandiyarajan and Thyagarajan - Populated with a peerless support cast, actors who bring just the right history to their roles. Half of the director’s work is done here with the right casting. A penetrating, sensitive and sometimes shocking dissection of the hearts, Ponmagal Vandhal makes for taut, absorbing and compelling drama that reaches far beyond the close confines of its jury room setting. However, you cannot get rid of the fact story wise, it feels a bit predictable, a bit obvious and you mostly know what’s going to happen next. However, within its own middlebrow limitations, it delivers the goods. The screenplay is effective enough to keep the tension strong, unfolding the way a fairly thin story would, slowly but with maximum impact.

Too few films take on the art of arguing as a subject; we could certainly use more of them. Ponmagal Vandhal has everything that you would expect from a courtroom drama, some stirring speeches, infuriating setbacks and a tendency to overstate the obvious. The topic of discussion here is so limited that the director has to match that with a lot of lengthy dialogues. The fact that a successful lawyer who has handled over 99 cases would not ask for something basic like a DNA test, seems to be a huge miss, when in fact he keeps asking for evidence for everything else. In fact, Ponmagal Vandhal is a wonder of good dialogue, strongly seen characters and a structure that pays off in the big courtroom scene - as the genre requires. Jyotika carries the film on her shoulders in what you can call her career best performance. It’s a rousing and moving enough performance from Jyo coming out of her comfort zone. She has stayed true and honest to the character right through the film, the lengthy dialogues, the shiver in her voice while crying, Jyo has aced her role to the perfection.

Pace while the film has no issues, you may FastForward at places only because it carries a couple of disturbing scenes but at no instance in which boredom threatens. The climax looked hurried and incomplete, the verdict in the end looked half-baked without enough substantial evidences. A message-oriented film like this must have had an even stronger climax to leave a lasting impact. At least in a couple of scenes, you see the entire courtroom filled with nothing but tears, such emotional goof-ups only reduce the authenticity of the narration. Govind Vasantha shines yet again with a couple of soul-stirring melodies. One of the tracks has heavy resemblance to a song from 96. His background score is seamless and helps the flow of the film. Ramji’s cinematography is top notch as usual but one feels the DI was inconsistent with a few frames alone clouded with pink gradient, maybe it could even be a symbolic representation.

Verdict: A powerful courtroom drama with taut emotional pull that smoothens out the procedural shortcomings and logical loopholes!